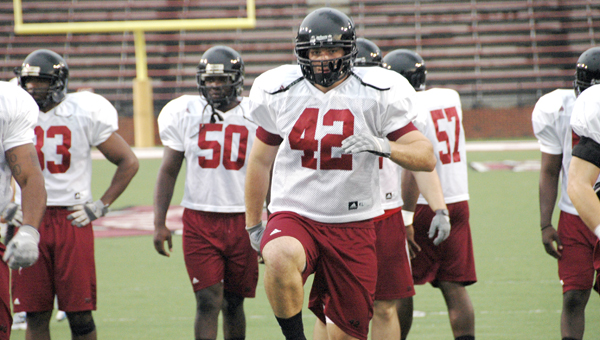 When the opportunity arose to start for the Troy University Trojans football team this week at South Carolina, sophomore linebacker and former Andalusia High School player Brannon Bryan said he “stepped up” and took a chance.

Bryan, a sophomore, will make his first career start this Saturday when the Trojans face the SEC East Champions.

Bryan said the reason he was put in a starting role this week because “somebody had to step up.”

“We had a little issue on the team where somebody needed to step up, and coach told me Tuesday that I would be playing the Will linebacker,” Bryan said. “What I’m hoping is to have a good game, play good and play hard and hopefully I can keep the starting role throughout the season and hopefully into next year.”

The “Will” linebacker position belongs to the linebacker that covers the other two linebackers’ weak side.

Every game this season, Bryan has played on special teams on kick and punt returns.

Bryan and his teammates will be facing a South Carolina team that clinched the SEC East title last Saturday with a 36-14 win over Florida.

Troy is coming off a 52-35 homecoming loss to Florida International University.

Bryan, at 6-feet and 230 pounds, will line up with South Carolina freshman running back Marcus Lattimore, who has rushed 964 yards on 202 carries and scored 14 touchdowns so far this season. He had a season-high 212 yards against Florida.

Bryan said the key to stop Lattimore will be to tackle properly.

“First of all, we just have to get lined up correctly,” Bryan said. “Once the ball snaps, you’ve got to read your keys and get where you’re supposed to be — and if he steps in your hole, just wrap him up and hold on and wait for help.”

Despite having to play a top team in the SEC, Bryan said his team will treat this week’s contest like any other.

“What we need to do is treat it like any other game,” he said.

Fifteen miles from Columbia, Bryan’s father, Tim, and mother, Cindy were on their way to see Brannon play on Saturday.

Tim Bryan said in a telephone interview he was elated when he found out his son would be starting this week.

“I’m excited for him,” Bryan, who also played at Troy said. “I’m proud for him. He’s looking at it as an opportunity and is going to make the most of this opportunity.”

Kickoff in Columbia is at 11:21 a.m. this Saturday, and the game will be aired on the SEC Network.