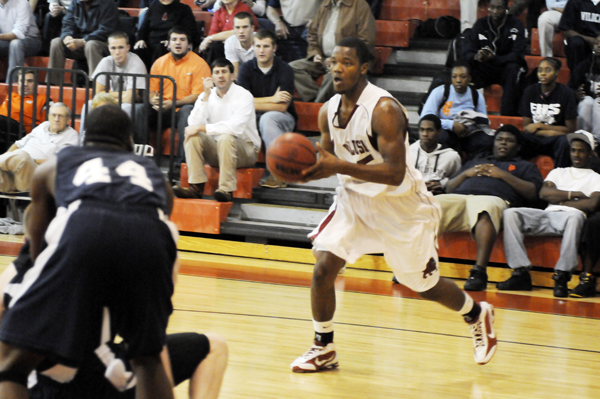 Andalusia’s Jacard Townsend had a double-double Thursday night. He had 27 points and 20 rebounds. | Andrew Garner/Star-News

Andalusia’s Jacard Townsend put together a double-double to help lead the Bulldogs to a 10-point 67-57 win over Class 6A Enterprise on Thursday night.

With Townsend’s 27 points and 20 rebounds, the Bulldogs (3-0) remain undefeated this season heading into the Enterprise Classic tournament this weekend. Andalusia will begin the tournament against Kendrick, Ga., at 1 p.m. Saturday.

AHS coach Richard Robertson said his team’s inside game could be better.

“Our guards, size-wise, are about the same,” he said. “They’ve got great shooters. As long as I am coaching, and as long as I do coach, we’re going to be inside-oriented.

“That was our goal was to get to the basket (Thursday night),” he said. “After three games, our inside people haven’t mastered the inside game like I want it.”

Throughout Thursday night’s contest, the Bulldogs and Wildcats stayed within 10 points of each other.

From the start, Enterprise took the lead, but the Bulldogs countered with 21 points compared to the Wildcats’ 18 going into the second period.

The Bulldogs surged ahead 24-21 to force an Enterprise time out, and increased their lead to 28-21 on a pass from senior point guard Derrick King to Corinthian Sims for a lay up. Sims finished the night with 13 points, and King added eight.

Enterprise cut Andalusia’s 30-24 lead late in the second period on a three-pointer. By halftime, the Wildcats were down by one point at 30-29.

It was back and forth during the third period for both teams as the Wildcats and Bulldogs relied heavily on their inside games.

At the end of the third, Sims found Townsend under the basket for an easy lay up and a 45-42 Bulldogs lead.

In the fourth period, Andalusia pulled away from Enterprise, going out to a 50-42 lead early.

At one point, the Bulldogs led 63-50 on a pass-lay up play from King to Victor Benson.

Townsend scored the last two points for his team on a jumper, and Enterprise’s Jourdan McGowan drained a three-pointer for good measure. McGowan finished with 21 points for the Wildcats. Enterprise’s Clark Quisenberry contributed with 12. Michael Sheldon added six points, while Rhett Harrelson and Wesley Person had five each.

“If we get beat, we want to somebody else to do it besides Wesley Persons Jr.,” Robertson said. “We did a decent job of taking them out of the offense. We turned them loose. Somebody had to step up, and the other guys didn’t rise to the occasion.”

Benson added eight points and Quayshaun Denson had six for the Bulldogs.

Florala gets 1st win of season