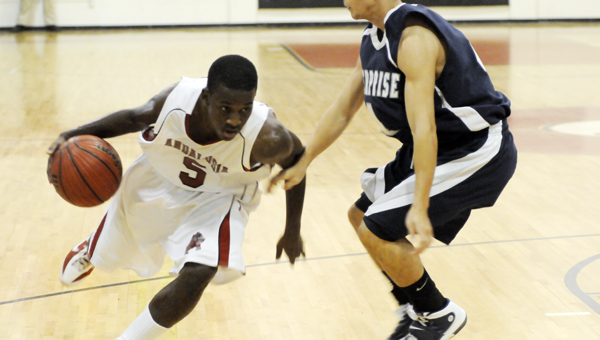 Andalusia’s Derrick King (5) dribbles toward the basket during Thursday night’s contest against Enterprise, the host of the Wildcats Thanksgiving Tourney. | Andrew Garner/Star-News

The only thing Andalusia coach Richard Robertson wants from his players this weekend at the Enterprise Wildcat Thanksgiving Tourney is for them to “play well.”

“Our goal or aim is that we want to play well every night,” Robertson said. “I feel like if we play well, then we’ve got a chance to win.”

Andalusia enters the tournament after defeating the host team 67-57 on Thursday night. The Bulldogs are on the same side of the bracket as Kendrick, Ga., Dothan and Central-Phenix City. Enterprise is on the top side of the bracket with Charles Henderson, Robert E. Lee and Opelika.

Andalusia is the smallest Alabama school in the tournament classification-wise at 4A. Enterprise, Dothan, Robert E. Lee, Opelika and Central-Phenix City are in Class 6A. Kendrick is in Class 3A in Georgia.

“The thing that is in our favor is that they can’t put but five players out there,” Robertson said. “It doesn’t matter who you are or where you’re from, it’s what you do.”

Andalusia will start the tournament against Kendrick today, Sat., Nov. 20 at 1 p.m. in Gym A at EHS.

“The reason we’re playing in this tournament here is because it’s tough competition,” Robertson said. “Everybody we play is tough. Like I told my players, we don’t get to play anybody unless they’re high quality. We lost teams out of our (Christmas) tournament because it’s hard to get a schedule without playing the bigger schools.”

This will be the first time Andalusia will play Kendrick, and Robertson said the game plan will be like it always is heading into the game.

“We’re going to put in our generic plan so we can feel them out,” he said. “We know they’re good because (EHS) coach (Brian) Weeden used to work in that area in Columbus (Ga.).

“No matter who we play, everybody we play is supposed to be good,” he said.

“I know everybody there,” Robertson said about his team’s side of the bracket. “We played Dothan.

“They’re a good basketball team,” he said. “I don’t like to play somebody we’ve already played again. That’s the way the game is because whatever you use to beat them the first time, they’re going to use it to counter it and figure out what it is. My philosophy is whatever you do, do it well and you’ll be okay.”