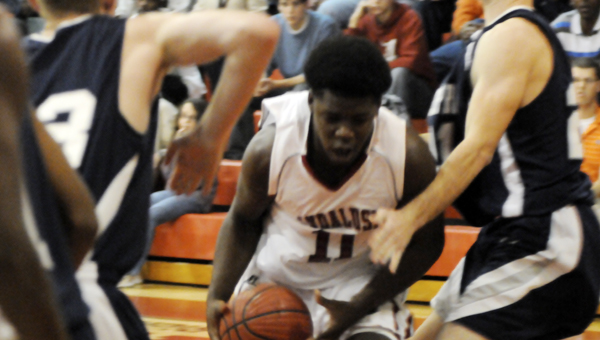 The Andalusia Bulldogs suffered their first loss at the Enterprise Wildcat Thanksgiving Tourney on Saturday, falling to Kendrick, Ga. 58-54.

Andalusia held a 25-22 lead at half time, but in the final minutes of the contest, boys coach Richard Robertson said the team “lost the ball game.”

“We didn’t play well at all,” Robertson said after practice on Monday. “We played well enough to win, but we didn’t. We gave it away.

“They had a good plan for us. We broke down in spots with people going the wrong way,” he said. “We still have one or two that don’t understand where they’re going.”

The Bulldogs continued their tournament stretch against Dothan yesterday, and complete coverage on the game will be in the Wed., Nov. 24 edition of the Star-News. Andalusia beat Dothan, 67-44, and will play Opelika today at noon.

Right now, Robertson said he is more concerned about the team than any opponents his Bulldogs will play.

“I’m not worried about the opponent as much as I am worried about us,” he said. “We’re too erradic. We haven’t put a game together yet. Everyone in our schedule is good enough to beat us. They’ve got to understand that.”

The highest Andalusia will be able to finish at the Wildcat tournament is in fifth place, so Robertson said the aim is to take it “one game at a time.”

“We just want to play well and take it one game at a time,” Robertson said. “Last year, we won it over there. We can’t win it now.”

The tournament will end today, where the fifth place game will be played at noon.