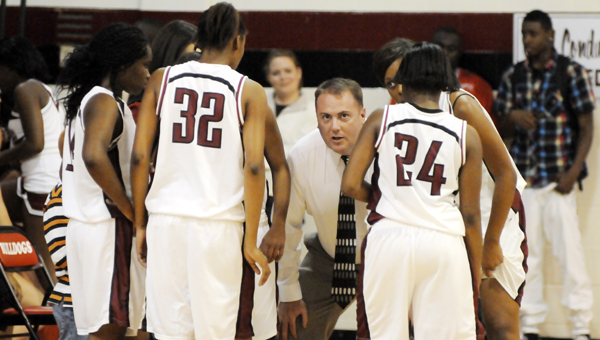 The Andalusia Lady Bulldogs fell to 1-3 last Saturday in a 65-35 loss to Opelika. | Andrew Garner/Star-News

Andalusia’s Lady Bulldogs only had 18 rebounds and shot 4-for-12 from the free throw line on Saturday in a 65-35 loss to Opelika at the Enterprise Wildcat Thanksgiving Tourney.

The Lady Bulldogs continued their play at the tournament yesterday, where they played Slocomb at 6:30 p.m. Complete coverage of Monday night’s game will be in the Wed., Nov. 24 edition of the Star-News.

AHS girls coach Bennie Shellhouse said one main reason his team didn’t win was because of its “movement.”

“We didn’t have any movement on offense,” Shellhouse said before leaving for the tournament Monday afternoon. “We were just standing around.”

The Lady Bulldogs (1-3) played a Slocomb team that competed in the Class 3A Regional Finals against T.R. Miller for the last two years, Shellhouse said.

“The pressure doesn’t get them,” he said about Slocomb. “We need to lay it all on the line.”