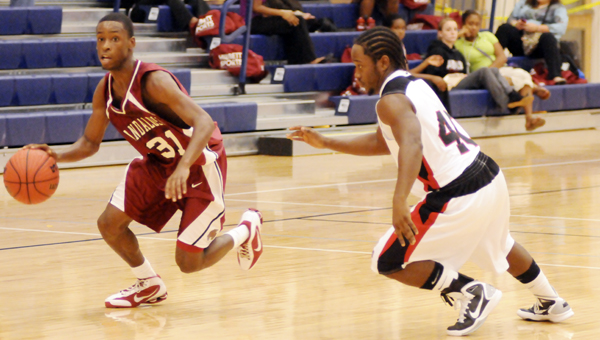 ENTERPRISE — An out-of-bounds call made at the last second of Andalusia’s 71-70 win over Opelika at the Wildcats Thanksgiving Tourney on Tuesday afternoon was the game-saver for the winning Bulldogs.

In the close game, four Andalusia players scored in double digits against Opelika at the Wildcats Thanksgiving Tourney at EHS that would lead to a fifth place finish for Andalusia.

Andalusia’s road to a fifth place finish started on Saturday, where it fell to Kendrick, Ga. 58-54.

On Monday night, Andalusia turned things around to beat Dothan 67-44 to set up the game against Opelika.

With Tueday’s win, Andalusia improves to 5-1 on the season.

“We’re proud to be 5-1, but we should be 6-0 and the champions,” AHS boys coach Richard Robertson said of the tournament result. “If we can learn something from what happened to us this week, it’s that our guys don’t really understand that we can play with anyone if we do what we’re taught to do, and not what they want to do.”

With 1 second remaining in the contest, Opelika’s Braden Rogers threw the ball all the way from the opposite side of the court to his teammate out of bounds. His teammate then threw it back in bounds, where an Opelika jumper for two points didn’t count at the buzzer.

Before any of this transpired, both teams gave each other the ball back by on out-of-bounds plays.

“That wouldn’t never have happened if we would have caught the ball on the base line,” Robertson said of the call. “We should have caught it, and held it (earlier to run the clock out).

“We missed, and lost it out of bounds,” he said. “That’s what I am talking about — a lack of execution. All we should have done is catch the ball, and that would’ve never come to pass.”

At the end of the first quarter, Andalusia led 16-14, but Opelika held a 38-30 lead at half time with the help of swishing consecutive threes. Then, Andalusia outscored the sixth place finishers 20-16 in the third quarter, and 21-16 in the fourth for the win.

Throughout the second half of play, Andalusia and Opelika answered each other offensively. Opelika relied more on its three-point perimeter play, whereas Andalusia kept to its inside game attack.

Passes on the inside from players driving to the basket netted Andalusia the win. Additionally, Andalusia held a 70-67 lead with less than five seconds left, but a three-pointer by Opelika’s Jamario Mitchell tied the game.

King then was fouled, and sent to the free throw line, where he was 1-of-2 to get the go ahead and winning score.

Robertson said the key to Tuesday afternoon’s win was that Andalusia never quit.

“We kept changing defenses, and found something we can do,” he said. “Then, we got some steals and started taking the ball to the basket. They were leaving it on the outside shot, and we were going to the basket.”

Andalusia will travel to play Monroeville Tues., Nov. 30 at 5 p.m.