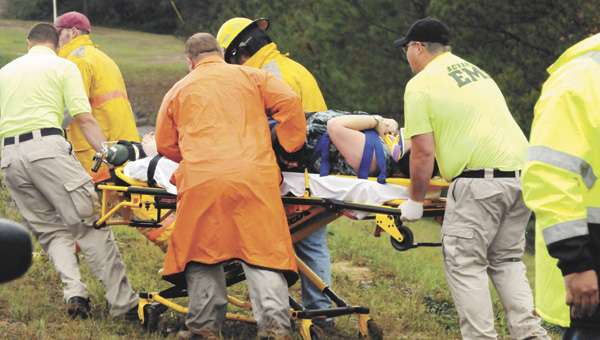 Emergency personnel haul Heather Countrymen up the hill after her vehicle left the road and struck a tree on Tuesday. | Andrew Garner/Star-News

The first accident occurred at 10:40 a.m., where Jason Dean of McKenzie, was driving a 1994 Chevrolet Pick-up truck, the Evergreen State Troopers office reports.

In the second accident, the vehicle driven by Heather Lyn Countrymen of Greenville left the roadway and struck a tree at 11:55 a.m., trooper Gary Peek said.

“The only thing I can say is that I’m investigating the accident and the vehicle left the road and struck a tree,” Peek said.

Reports indicate that the jaws of life were used to free Countrymen from her vehicle.

She suffered minor injuries, and was transported to Andalusia Regional Hospital. Peek said the accident is still under investigation.

200 angels still need to be adopted

With two days left before the drop off day, about 200 children still need to be adopted to make Andalusia’s... read more