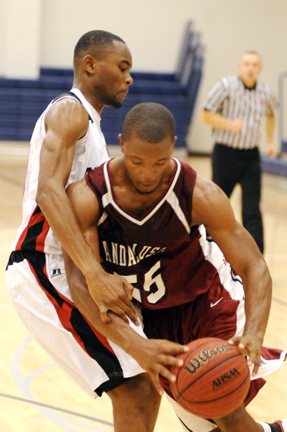 Andalusia cut out Monroe County’s point guard and top shooter in the second half of Tuesday night’s road game, and rolled to a 70-46 win over the Tigers in Monroeville.

The Bulldogs led 35-26 at half time, and AHS coach Richard Robertson said the plan in the second half was to change defenses.

“We didn’t know anything about them,” Robertson said of MCHS. “We looked at their personnel, and we got the bearing that if you kill the head, then the body will die. We took the guy that was initiating the attack — the point guard and the shooter — we took them out of the equation.”

The Bulldogs (6-1) led throughout the contest against the Tigers, outscoring Monroeville 17-13 in the first quarter, and 18-13 in the second quarter. In the second half, Andalusia put up 15 points in the third quarter, and 20 in the fourth quarter to pull away with the win.

The Bulldogs met their defensive goal on Tuesday night, holding the Tigers to less than 50 points on offense.

“We ran our generic offense,” Robertson said about the high-scoring game.

In varsity girls action, the Lady Bulldogs beat MCHS 39-17, where younger players got the opportunity to get some needed playing time, girls coach Bennie Shellhouse said.

“It was a good opportunity for my ninth grade kids to see what they need to do,” Shellhouse said. “In the first half, we had pretty good defensive sets. We ran our offense pretty well, and it’s getting better.”

Shellhouse said he didn’t start any starters in the second half.

Andalusia will hit the road to play Pleasant Home tonight, and will end the week on Friday at Opp.

The Opp Lady Bobcats pulled out a 60-49 win over Elba on Tuesday night, and improved to 3-1 on the... read more