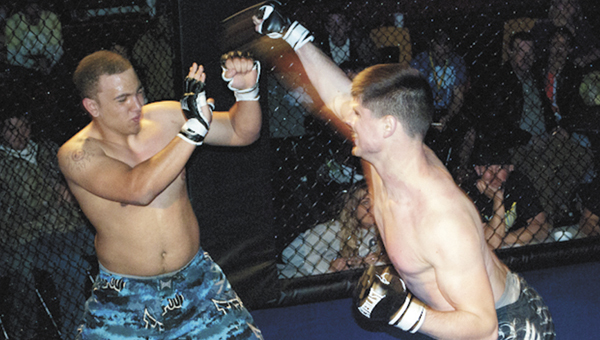 The United Fighting Alliance held a fight night to help raise money for the Florala football program last Saturday night. Above is an action shot from one of the fights. | Heath Harrison/HKH Photography

It was fight night at the Florala City Middle School building last Saturday, and as a result, the Florala Wildcats football program got some cash out of it — $1,230 to be exact.

The United Fight Alliance, through fight coordinator Sammy Cope, held the fundraiser/fight night to raise money for new equipment for the football program at FHS.

“We really kind of got attached to it,” Buckler said. “(The fundraiser idea) was approached to us by the fight promoter and city rec board. All we did was put up some posters, and promote it as much as we could.”

“It was a packed house that night,” he said.

The money raised will go to help purchase a neck machine and new helmets, Buckler said.

“We’re hoping to get a lot out of the money,” he said. “I’ve been making calls around. When I came here, the equipment was not where we needed it to be for the players to be protected. We want to make it where the parents won’t have to worry about the health and safety of their child.”

Cope said 75 percent of the fight’s earnings went to the program, and that he just wanted to help the team raise some money.

“I wanted to put on my first (Mixed Martial Arts) show, and I’d like the money to go to them,” Cope said.

Cope said he’s been a coordinator for three years, and that plans are in the works for another fight soon to help raise money for the Florala Recreation Department.