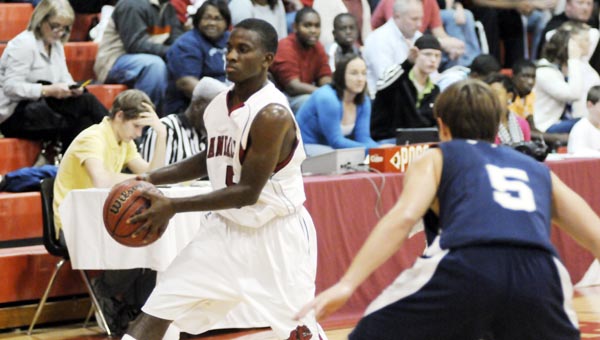 Andalusia won its 12th game of the season, and will face undefeated Hillcrest-Evergreen on Friday night. The Jaguars are 11-0 after a win over Class 5A Greenville on the same night.

“We’ve still got an on and off switch,” Robertson said. “When we start it off, the little things will add up to big things.

“We got the tip, and gave the ball away without scoring,” he said. “Now, we’ve lost the opportunity to score, plus the possession error (turnover). For us to be a good team — a great team — you’ve got to take and capitalize on all of your opportunities.”

Robertson let his starters take a rest after a strong 23-2 first period over Pike County. Then, Pike county went on to outscore Andalusia (12-1) 16-12 in the second period.

At the start of the second half, the starters returned where Andalusia outscored Pike County 23-16 in the third period and 23-11 in the fourth period.

Robertson said a bright spot in Tuesday night’s game was the “defense” at times.

“Our defense was superb in the first quarter,” he said. “Then, we substituted and let them back in the ball game (in the second period).

“Not to embarrass anyone, but we’re playing against perfection,” he said. “When we get out of kilter of our plan, that upsets me. Some of these guys have been here four to five years and know what’s supposed to happen.”

The keys to Andalusia’s win on Tuesday night was rebounding, Robertson said.

Just like the past few games, Andalusia’s younger talent had the opportunity to get in some playing time.

“The plan is to play any game where we play most everybody because we don’t have but two to three that’s inexperienced,” Robertson said. “Our young inside people, I’m not afaid to play them.

“Everybody that comes to practice and does their work, then I’m not afraid to play them,” he said.