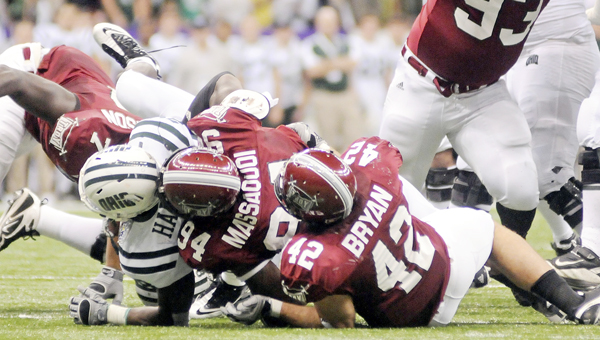 Under the dome lights at the Super Dome in New Orleans, Troy Trojans linebacker Brannon Bryan said he had the best game of his young career.

In a telephone interview on Monday, Bryan recalled that it didn’t take long for him to get his “mind ready” for the game.

“Rhey had it kind of like the Trojan Walk like we do at home before a game,” he said. “That gets your mind ready to play. Once you get there and you’re in the Super Dome on national TV — it doesn’t take much to get you going.”

In fact, it didn’t take Bryan long at all to get the hang of things during the game because of the preparation it took before the game, he said.

“We had a god while since our last game before this game,” he said. “It was really just studying a lot of film and having plenty of good days at practice. We had mental reps (repetitions) every single day, and once you get in the game, it makes it a lot easier.”

On the interception play, Bryan said it was a little more complicated than it looked.

Ohio was on the Troy 37-yard line, and was making a drive for the end zone, Bryan said.

During the third-and-seven play, Bryan said he made the right read on the Ohio receiver going for the ball.

“I had my eyes on him, and saw his hands go up, and I turned around,” he said. “As soon as I turned around — the ball was in my face. Somehow, I made a play on it. I just stuck my hands up in the air, and snagged it.

“I didn’t have time to think about it,” he said. “Somehow I made the play, and I was happy to get off the field when they were putting the drive together like that.”

Being able to play this early in his career, and in a bowl game no doubt is a dream come true, Bryan said.

“I was expecting to be a back up all year this year, and kind of just go along with everything the whole season,” Bryan said. “I had the opportunity to play. I expected us to be in a bowl game, but I didn’t expect to be starting in a bowl game.”

Other than playing in the bowl game, Bryan said he only had one thing on his mind, while in the Big Easy.

Bryan is the son of Tim and Cindy Bryan of Andalusia.