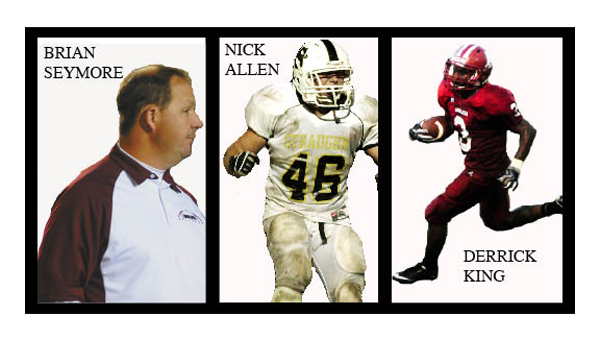 Andalusia finished with another successful season in 2010, making it to the first round of the Class 4A state playoffs, and winning the Region 2 championship with style. The Bulldogs had some close games throughout the season, namely a 21-20 victory over Ashford for the region title and a 10-0 win over rival Straughn. As a result of Andalusia’s success on the field, head coach Brian Seymore, AHS senior running back and all-purpose player Derrick King and Straughn senior linebacker Nick Allen highlight this year’s Andalusia Star-News Class 3A-4A All-County football team as Coach of the Year and Offensive and Defensive Players of the Year. Additionally, Straughn played its first season in Class 4A, and finished with a 10-2 record in the second round of the playoffs, where the team fell to state champion Thomasville.

Andalusia head coach Brian Seymore is this year’s Coach of the Year.

Seymore finished his third and best year at the helm of the Bulldogs’ program. In 2009, he bounced back from an abysmal 2-8 record in 2008, to finish 6-5 in the first round of the playoffs.

Seymore said the “credit” goes to his support staff on the team.

“I’ve been truly blessed to have the coaching staff that I had this year,” he said. “I felt like the chemistry we had with our coaching staff was excellent, and that was the difference.

“You’d add that with our players and the work ethic they put forth and the adversity they faced, it’s a credit to those guys — the coaching staff and our players,” he said.

When asked what his most memorable moment was this season, Seymore said as a coach it was the come-back win over Ashford to win the region title.

“If you think about the most memorable moment it would probably the win over Straughn,” he said. “Our defense played great. I think that’s the highlight for our players. But, as coaches the next week and coming back from being down against Ashford, and the players facing that adversity — I think that’s the highlight for the coaching staff this year.”

The runner-up Coach of the Year is Trent Taylor of Straughn.

Bulldogs senior running back and all-purpose player Derrick King, this year’s Player of the Year, rushed 1,205 yards on 186 carries and scored 12 touchdowns on the ground. In the air, King caught 12 receptions for 276 yards and scored three touchdowns. He also had 68 yards in kickoff returns and scored one touchdown.

“It’s a great honor,” King said about being named the Offensive Player of the Year. “I don’t look for individual awards, but it’s good to get something you deserve. I just worked hard at what I did, and I put my all into it for coach and my team.”

At the beginning of the season, AHS coaches weren’t sure whether King would be able to hold up against the competition because of his 5-foot-six inch and 142-pound frame.

Seymore said the perception changed when he started making big plays for the team.

“I knew we had to find a way to get the ball in his hands,” Seymore said. “We figured the best way to do it was put him back at tail back in the ‘I’ (formation), and put a good full back in front of him and allow him to make plays.

“We knew what kind of impact he can make,” he said. “He had the ability to make people miss. We knew he could make plays, but we didn’t know he could make that many plays. He’s a great athlete and a great kid, and he deserves nothing but the best.”

King said as a player, the most memorable moment for him was his fourth-and-11 catch for a first down that led to a touchdown during the Ashford game.

“We needed that play right there, and I said, ‘coach just get the ball to me,’ and I made it happen,” he said. “All of a sudden I was open, he (Deion Akins) threw it to me, and I made the catch and then we scored from there.”

The runner-up Offensive Player of the Year is Josh Dewrell of Straughn.

Allen said his success this season came from his teammates around him on the field.

“I couldn’t have done it without my whole defense,” he said. “Our defensive line helped a lot. And just knowing that I can trust the people in front of me and beside me — that’s just one of those things that helped me out.”

SHS coach Trent Taylor said Allen is one of those players that utilized his playing experience to get better as the season progressed.

“Obviously his experience and what he could bring to the field was immeasurable,” Taylor said. “Nick would be the first to admit that the year didn’t start out the way he would like for it to have. That’s another thing to credit him with. But, as the season went on, he kept improving and working on his game to get it back where it was a year ago.”

What Taylor said about Allen improving came in handy during the first round of the playoffs against UMS-Wright. Straughn came back from a 12-point deficit in the second half, and scored 16 unanswered points to beat UMS-Wright 36-32.

Allen said the first-round playoff game was one that he’ll never forget.

“Going into that game, everybody told us that we couldn’t do it,” Allen said. “Nobody thought we would be able to beat them. It was the first time UMS lost in the first round in 16 years.

The runner-up Defensive Player of the Year is Johnnie Jones of Andalusia.

On the offensive side of the ball, Andalusia makes up four slots out of 11 on the team.

Straughn’s Josh Dewrell was selected as the quarterback. He was 28-for-67 for 606 yards and threw seven touchdown passes. He also had 188 carries for 964 yards and had 22 rushing touchdowns.

On the receiving side of the ball, Opp’s Trent Finedore was named the tight end. The wide receivers are Straughn’s Austin Pickrel, Opp’s Drew Smith and Andalusia’s Deunta Benson.

The Star-News would like to thank Kendall J. Davis, from Covington County Sports for providing the picture of Straughn’s Nick Allen.