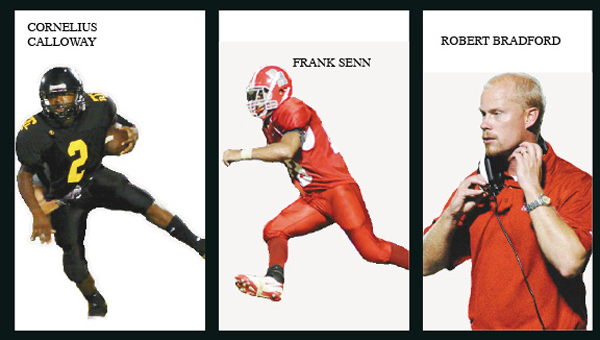 This season marked four years since both teams made an appearance in the playoffs. Pleasant Home faced and lost to eventual state champions Sweet Water in the first round, and Red Level lost to Southern Choctaw in the first round.

As a result of Pleasant Home’s late season success to claim a spot in the playoffs, head coach Robert Bradford and senior running back Frank Senn were selected as the Coach of the Year and Offensive Player of the Year, respectively.

Additionally, Red Level’s Cornelius Calloway was selected as the Defensive Player of the year.

Pleasant Home head coach Robert Bradford is this year’s Coach of the Year.

Bradford finished his fourth season at the helm of the Eagles’ program, in which he coached his first game in the playoffs as a head coach.

“The first thing I thought about was all of those players that bought into everything we’re trying to do this year,” Bradford said about becoming the Coach of the Year. “It’s almost a big honor for them, than it is to me. Nothing really good can happen without them.

The Eagles earned a berth in the playoffs with a 28-14 win over Geneva County, and Bradford said that game was memorable because of the way the players played on the field.

“It was pretty much everything we were trying to buy them into since I got there — playing hard and not being denied and when games are over, leave it all on the field,” he said. “Just watching those guys did that is something I’ll definitely remember in the future.”

The runner-up Coach of the Year is Tony Ingram of Red Level.

Eagles senior running back Frank Senn, this year’s Offensive Player of the Year, rushed for 1,729 yards and scored 19 touchdowns on the ground. On defense, Senn totaled 47 tackles and nabbed four interceptions.

“Words can’t explain to me how much I appreciate getting this award,” Senn said. “I worked hard for it, and I totally didn’t think I was going to get that.”

During the Geneva County game, Senn said there was a moment during the captains meeting that will stay with him for a long time.

“On senior night when I walked out with my captains, that was my most memorable moment,” he said. “Just being there for them. It’s hard to undertand how memorable it was to me, but it was.”

When asked what he thought were his “keys to success” this season, Senn paused and said it goes back to the offensive line.

“Our running back coach (Bradley Stephens) coached us really well,” he said. “Threw the linemen, it was all up to me. I just had to get extra yards through the second effort.”

Bradford said Senn’s work ethic rubbed off on the team this season.

“His personality is a workman personality,” Bradford said. “He’s going to do exactly what he’s asked. He’s kind of one of those leaders that leads by example. How hard he plays the game really inspired his teammates to bump their game to the next level.”

Senn said he wanted to thank all those that helped him succeed this season.

“I just want to thank my coaches and the coaching staff,” Senn said. “All of the team, and mainly all the seniors. They were committed to this team. Without them, we wouldn’t have gotten anywhere.”

The runner-up Offensive Player of the Year is Raheem Bullock of Red Level.

“It feels real good,” Calloway said on receiving the Defensive Player of the Year award. “I love defense.”

Calloway said the keys to his success were “working hard” and “lifting weights” during the season.

During the Zion Chapel game that gave the Tigers their playoff berth, Calloway said his interception play was the most memorable from this season.

“They threw the ball, and I caught an interception, which was real good because it allowed our team to score points,” he said.

RLS coach Tony Ingram said Calloway had an amazing work ethic on and off the field.

“He made a huge impact,” Ingram said. “His motor runs all the time, and he’s got a good sense of where the ball is all the time.

“He’s worked extremely hard this season — probably harder this summer than he ever did,” he said.

The runner-up Defensive Player of the Year is Hunter Oswald of Florala.

On the offensive side of the ball, Pleasant Home dominates making up eight slots out of the 11 slots on the team.

Red Level’s Preston Ryce was selected as the quarterback. He had 400 yards rushing and 412 yards in passing. He threw 12 touchdowns and had five interceptions.

Defensively, Red Level’s Cornelius Calloway takes the top spot for the linebackers’ position. Florala’s Hunter Oswald and Zac Fleming take the No. 2 and 3 spots in the linebacker position. Calloway had 80 tackles.

The punter is Florala’s Hunter Oswald and the kicker is Red Level’s O.J. McGee.

The Class 1A-2A All-County team was compiled by Star-News sports editor Andrew Garner. Red Level, Pleasant Home and Florala’s head coaches were invited to nominate players on the team. The Star-News would like to thank Kendall J. Davis and Derrick Bass, from Covington County Sports for providing the pictures of Red Level’s Cornelius Calloway and Pleasant Home’s Frank Senn.

Wildcat basketball takes down pair of 4A opponents