Looking back at sports highlights 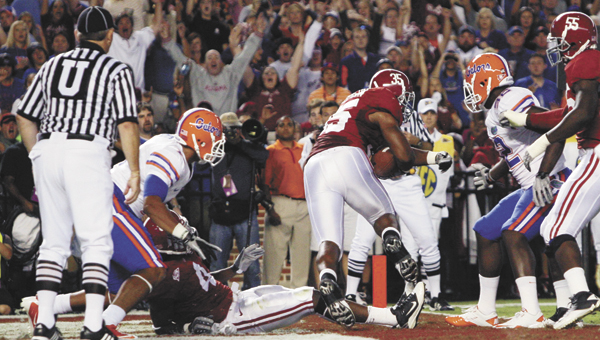 Taking a look at the sports highlights of 2010 for local fans.

1. Nico gets 1st career INT: The highlight of 2010 came on Sat., Oct. 2, when Alabama sophomore linebacker Nico Johnson, an Andalusia native, caught his first career interception during the Florida game in Tuscaloosa. Florida’s Trey Burton threw a pass into the waiting arms of Johnson in the first quarter.

2. Senn selected to 1A All-State team: Pleasant Home senior running back Frank Senn was selected to the Class 1A Alabama Sports Writer’s Association’s All-State football team in December. Senn rushed 1,729 yards and scored 19 touchdowns this season to help lead the Eagles to a first-round playoff berth.

3. SHS gets to 2nd round: Straughn’s first season in Class 4A ended in the second round of the state playoffs. The Tigers fell to eventual state champions Thomasville 49-14. Straughn beat UMS-Wright 36-32 in the first round of the playoffs after trailing 32-20 during the game.

5. OHS, PHS baseball teams get to 2nd round in playoffs: Opp and Pleasant Home’s varsity baseball teams advanced to the second round of the Class 4A and 1A state playoffs, respectively.

6. SHS baseball team gets to 1st round: Straughn’s varsity baseball team finished in the first round of the Class 3A state playoffs, falling to Dale County 4-3 and 14-4.

7. 3 AHS tennis players get to state semis: Three Andalusia tennis players advanced to the semifinals at the state tournament in 2010. Mayur Patel, Chris Smith and Jackson Moore represented the Bulldogs in Montgomery at Lagoon Park.

10. SHS, PHS make state appearance: Pleasant Home and Straughn’s varsity softball teams earned another spot at the state tournament in May. However, both teams failed to advance, losing twice in the double elimination tournament.