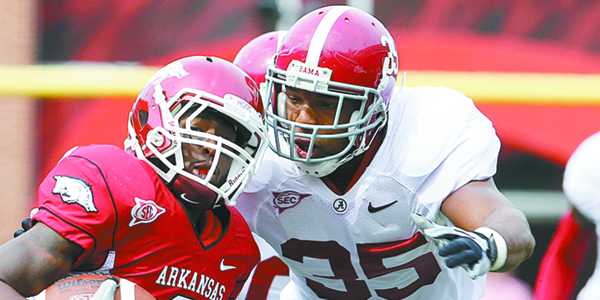 In college football, there are 60 minutes split into four quarters.

Alabama sophomore Nico Johnson, an Andalusia native and former AHS stand out, said on Tuesday the Crimson Tide must play hard every second of those 60 minutes in today’s game against Michigan State in the Capital One Bowl in Orlando.

“I think if we play like we’re supposed to play, then we should be OK,” Johnson said. “You know, we still haven’t played that 60-minute complete ball game this year. That’s what’s motivating us right now — to find that complete game.”

The Crimson Tide enters today’s contest ranked No. 15 in the Associated Press poll, and checks in at No. 18 in the USA Today Coaches’ poll. Alabama is 16th in the final Bowl Championship Series rankings.

The Spartans are ranked seventh in both the AP and Coaches’ poll, while holding the No. 9 ranking in the final BCS poll.

This will be the first meeting between Alabama and MSU.

Additionally, this will be Alabama’s second appearance in the Capital One Bowl. Its first came following the 1994 season in the former Florida Citrus Bowl, where the Crimson Tide defeated Ohio State, 24-17.

Johnson said MSU has quality players everywhere on the field, and preparation for today‘s bowl isn’t any different than his team’s preparation for the 2009 BCS National Championship against Texas.

“Our mindset now is that we know we’re from the SEC,” Johnson said. “We know we really are supposed to be more physical than them.

“They have athletes everywhere,” he added. “We’ve got to be on our stuff all the way — 110 percent every play. We can’t not show up because we’re Alabama, and we’re in the SEC.

Given the hype around Saban facing his former team, and the fact that Orlando has many distractions for the players, Johnson said Saban has consistently urged the players to remain “focused” throughout the week on today’s game.

“That’s one thing I think he’s been trying to keep us aware of — just staying focused,“ Johnson said. “And being enthusiastic about what’s going on.”

Johnson said the team watched MSU’s contests against Notre Dame and Iowa to name a couple in preparation for the bowl game.

“With the defense we run, I think the Notre Dame game for us, was one we watched a lot of,” he said. “There are a lot of games that we watched — pretty much Notre Dame and Iowa. Iowa is the only other team I think that beat them. So, just watching the Iowa game and taking a lot of tips from players in the Iowa game, it shows a lot.”

Kick off today is at noon CST, and the game will be broadcast on ESPN (HD).

What? Ain’t no MSU fans ‘round here