FHS boys fall in shoot out

Charles Dickens wrote “A Tale of Two Cities,” and J.R.R. Tolkien wrote “The Lord of the Rings: The Two Towers.”

Florala boys basketball coach Brad Garner said his team’s two games at the Alabama-Florida Shoot Out was “almost like the tale of two different teams.”

“We did not play real well Thursday night against Baker,” Garner said about his team’s 56-27 loss. “I think we were 9-for-42 from the field. We shot it just awful.”

However, the Wildcats managed to come back and give Laurel Hill a game of it despite a 59-51 loss.

“We came back and played Laurel Hill on Saturday, and I thought we played pretty well,” Garner said. “Laurel Hill is a real good basketball team. We stayed in the game. We got as close as five or six (points), and they got up as many as 11 or 12 (points).”

Garner said the 51 points scored by his team in the Laurel Hill contest was the highest shot output all year.

Austin McNeill led the Wildcats with 10 points and 13 rebounds, and Lavoris Ball added seven points against Baker. Additionally, McNeill and Ball had another good night against Laurel Hill on Saturday. Ball scored a game-high 19 points, and McNeill added another double-double with 11 points and 10 rebounds, respectively.

“On Saturday night, I thought we played a lot better defensively,” Garner said. “(Ball) hit his best offensive game yet. We were real glad to see that out of him. Austin McNeill, who is a tenth grader, had two double-doubles.

“We had some people have some good days,” he said. “That was a good tournament for (McNeill). He’s just a 10th grader, and I was pleased with that.”

The Wildcats will start their area play tonight at home against Kinston. Tip off is after the girls game, which begins after the B-team.

Garner said he hopes the momentum his team showed on Saturday carries over into tonight’s contest.

“I hope that gets us headed in the right direction,” he said. “We have Kinston (tonight), and we need that effort — plus.

“I’d love to have a big crowd down here to start our area play. We need folks,” he said. “I know the holidays is a hard time to watch basketball. We need as many folks as can to get down here.”

In girls action, the Lady Wildcats lost to Baker 38-36 on Thursday, and beat Laurel Hill 35-26 on Saturday. 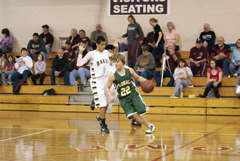