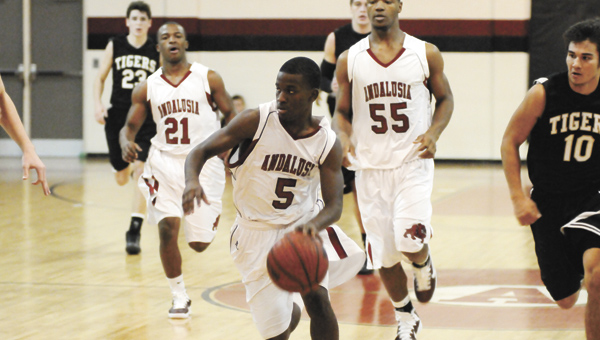 Andalusia’s up-tempo game and quickness on offense and defense helped lead the Bulldogs to a 62-26 area win over rival Straughn on Tuesday night at home.

The Bulldogs’ intensity at the beginning of the contest, and handling Straughn’s pace propelled them to a 38-18 half time lead.

“I had scouted Struaghn, and I knew their plan,” Robertson said. “I knew we had to take them out of their comfort zone. Coach Andrews has done a good job of teaching them his system.

“Their plan is to lure you into their pace,” he said. “They were going to keep the score low, and keep picking you. Coach Andrews had a great plan, and they were well-prepared for us.”

Corinthian Sims led Andalusia with 23 points and added nine rebounds in the win.

Straughn stepped up its game plan, and matched up pretty well with Andalusia, forcing the Bulldogs to take too many perimeter shots.

Andalusia led as much as 33-16 in the second period on Straughn turnovers.

Andrews said Andalusia’s quickness was the difference in his team’s loss.

“What we can try and take away from this is that when you try to run with teams that are more athletic than you are, you’re going to get your head handed to you. That’s the trick to this,” Andrews said. “For us to beat a team like Andalusia, we’ve got to hold them possession-wise so they can’t score more than 50 points. We’re supposed to have an opportunity to win.”

Andalusia had 29 rebounds for the night.

The third period was not the best for Straughn as point guard Chris Huggins fouled out, leaving the Tigers with a 41-18 deficit with more than four minutes remaining.

The Bulldogs took advantage, and went on to take a 53-22 lead going into the final period of the contest.

Andalusia outscored Straughn 9-4 in the fourth period to take the win.

The Bulldogs will play host to Headland on Friday night, and Straughn will host Ashford. Andalusia’s and Straughn’s boys varsity games will start at around 7 p.m.

In B-team action, Andalusia came away with a 44-6 rout over Straughn.