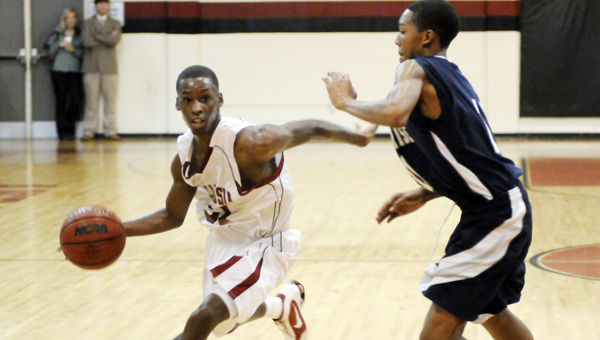 Andalusia's Quayshaun Denson advances down the court during an earlier game this season. | Andrew Garner/Star-News

The second-ranked Bulldogs come into tonight’s contest after defeating rival Straughn 62-26 on Tuesday night. Headland enters the game after falling 54-44 to Houston County in regular season action on Tuesday night.

The Rams are led by Jahwon Williams, who scored 15 points against Houston County.

Headland has six seniors on the team, compared to Andalusia’s nine, and the only thing Robertson said he wants his team to do tonight is “execute.”

“There are some things we can do against them, but what I’m worried about is us executing,” he said. “We’re going to have to play good folks. To the naked eye, or the average fan, they don’t know when we’re breaking down, or breaking coverage — we do. That’s the problem.”

Robertson said Headland (12-8) is a good rebounding team, and matches up its perimeter game with a solid inside game.

“They like to run, and they’re all going to shoot it,” he said. “The reason why they got beat the other night (against Houston County) is because they made 9-of-29 shots. They like to shoot and miss, and then put it back.”

On the defensive end, the Bulldogs haven’t been in position when they need to be, Robertson said.

“I’d rather play the better defensive load than the offensive load,” he said. “We want stops on defense, and scores on offense.

“We haven’t been playing as well and executing as well as I’d like them to do, and that’s indicative of what happened in Ozark last week,” he said.

The Bulldogs (17-2, 1-0 in Class 4A, Area 3) lost to Charles Henderson 51-50 in overtime last Wednesday, suffering their second loss of the season.

At this point in the season, Robertson said records don’t matter.

“We’re all 0-0 in the area, and that’s what matters,” he said. “We’re trying to get the home court advantage, and win the area championship. The schedule is friendly right now, but you’ve got to win.”

Tip off in Andalusia is around 7 p.m.

AHS girls to step up game

Andalusia girls coach Bennie Shellhouse said the aim in tonight’s contest against area opponent Headland will be to “play as... read more