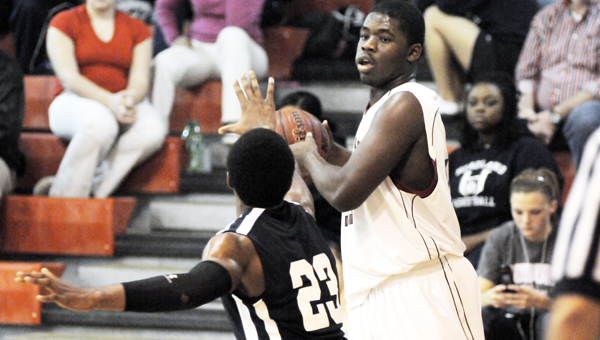 “We were fortunate tonight,” Robertson said.

The Bulldogs got off to a slow start in the first half, allowing the Rams to dominate in rebounding and on the inside.

“We weren’t ready,” Robertson said about the first half. “We’re the worst enemy we’ve got. When we see we’re in a hole, we try to dig ourselves out of it.

“We fight from the beginning, and start off losing the tip,” he said.

Andalusia improves to 18-2 overall, and 2-0 in Class 4A, Area 3. The Bulldogs will travel to face Ashford next Tues., Jan. 11 in area action, the first of two games on the road for the second-ranked Bulldogs.

Things started to turn around for Andalusia at the start of the second half.

The Bulldogs did what they do best, utilizing their quickness up and down the court, forcing turnovers and getting inside shots.

Quayshaun Denson, who finished with six points for Andalusia, connected with Jacard Townsend for a lay up at the start of the third period to cut Headland’s lead to 35-29.

The Bulldogs quickly turned the ball over, and a Denson assist to lead-scorer Corinthian Sims put Andalusia down by one point with 4:45 on the clock.

Andalusia crawled its way back from a 42-38 deficit to tie the game with 2:58 left, where the Rams took a time out.

“They played better tonight than either times I saw,” Robertson said about the Rams. “I knew they were good. They had the same team as last year, except for two kids.”

Andalusia tied the game up again 44-44, and a quick break away and pass to Sims gave the Bulldogs their first lead of the night with 1:34 left in the third period at 46-44. Sims finished with 23 points for the Bulldogs.

Townsend helped give Andalusia a 49-44 lead going into the fourth period, completing a three-point play with 22.8 ticks.

Andalusia then led by as much as 51-44 in the fourth period, making crucial put backs on missed shots.

The Bulldogs took a 59-50 lead with 4:45 left when Townsend made two free-throws.

Headland took advantage of Andalusia’s costly turnovers and fouls late in the final period to close the Bulldogs’ lead to 65-62 with 1 minute remaining.

When it mattered the most, free-throws came down to helping Andalusia win the ball game in the final seconds of play.

Andalusia’s Derrick King, who finished with seven points, shot 3-of-6 from the line in the fourth to give the Bulldogs the win.

Robertson said the success in the second half was due to a different type of game plan on defense.

“We went to something they weren’t expecting,” he said. “We shut down their point production in the second half. By the time they had made their adjustments, we had caught them.

“We were fortunate to catch up, and got some steals,” he said. “Then, (Rams coach Robert Williams) made good adjustments after we did, and got the lead. There are a lot of other ways to win besides points. We made them use time.”

Andalusia was 11-of-18 from the free-throw line on Friday night.

Headland got off to an early 8-0 run in the first period to take a 10-2 lead, and forced a time out by Andalusia.

The Bulldogs trailed 13-9 late in the first period, and their inside game plus a tres by Dooley helped them cut their deficit to 15-14 with 47 seconds left.

Andalusia tied the game up 15-all when Benson made 1-of-2 from the line.

Despite the win, Robertson said there is plenty of “work” to do.

“We’re going to come in here and go back to work,” Robertson said. “We’ve got to go on the road three times, three out of the next four area games. You’ve got to win them on the road as well as at home.