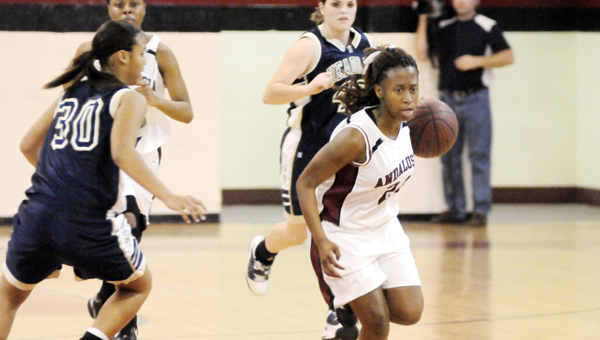 Andalusia’s Alexis Horton stepped up her game in the second half, scoring 26 of her 35 total points to help lead the Lady Bulldogs to a 65-47 area win over Headland on Friday night.

“She just showed up to play in the second half,” AHS girls coach Bennie Shellhouse said. “I think she felt like she had to step up and play. She missed a lot of easy shots in the first half. She was just not focusing on her shots. She made a game of it. When things get tight, things get well.”

The Lady Bulldogs only managed to outscore Headland 15-10 in the first period, and 9-7 in the second period to take a 24-17 lead at half time.

Andalusia’s inside output in the second period was next to nothing as the Lady Rams made a game of it, putting players in the paint to force perimeter shots.

One of the problems for Andalusia was shooting, Shellhouse said.

“I wasn’t sure if we wanted to shoot it,” he said. “We had a lot of turnovers, and traveling calls by not actually knowing what to do with the ball. That’s something we definitely have to work on.”

With Horton’s help, Andalusia outscored Headland 19-9 in the third period, and 22-21 in the fourth period.

Shellhouse said the focus next week before Ashford will be to get “mentally” ready for the next few area games.

“Our biggest focus we need to work on now is being mentally ready to play,” Shellhouse said. “We go over stuff at practice, and in the ball game we’re just not prepared.”

Shellhouse added that Shandrika Thompkins had a good night for his team, making a few rebounds and blocks.