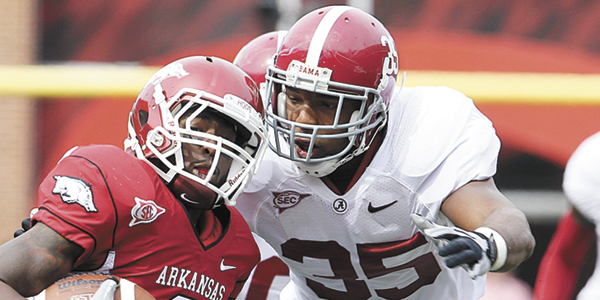 Alabama sophomore and Andalusia native Nico Johnson netted four tackles in his team’s 49-7 win over Michigan State in the Capital One Bowl on Jan. 1. UA Athletics/For the Star-News

Nico Johnson, Andalusia’s native son, got the bowl rolling literally at the Capital One Bowl on Jan. 1 in Orlando. He set the tempo for Alabama’s 49-7 victory over Michigan State by making a tackle for a 5-yard loss on Spartans’ running back Edwin Baker.

“One of the players came to me, and we were just sitting there talking before the game — he said that he felt like we weren’t ready — we weren’t ready mentally, and energized and all that,” Johnson said in a telephone interview. “It just hit me. ‘Why can’t I be the one to set the tempo?’ ‘Why can’t I be the one?’ That was kind of the mind set for me right before the game, and it happened the way it did.”

Alabama would go on to score 49 unanswered points until the middle of the fourth quarter, where Michigan State scored on a 49-yard touchdown pass.

Early in the second quarter, Johnson recovered what was initially ruled a fumble and ran the ball in for a score, but the play was reviewed and overturned. That score could’ve given Alabama a 21-0 lead.

Johnson said after the almost fumble play, he was thinking that he’d “try to get another one.”

“What I did was think, ‘OK, now I’ll go and try to get another one,'” he said. “Really, just try to create a turnover, or try to create a fumble, or something like that — just to continue to make plays.”

Alabama continued to struggle with injuries during the 2010 season. Johnson said the injury excuse had nothing to do with the way the regular season ended, referring to his team’s 28-27 loss to rival Auburn on Nov. 26.

“We could’ve been just as good as the one last year,” Johnson said about this year’s team. “We had a lot of talent everywhere in just about every spot. The team last year was a good team.

“You can’t compare both teams from this year to last year,” he said. “We have different aspects on each team.”

Watching a lot of film, and getting familiar with his opponent were two keys in his success at the Capital One Bowl, Johnson said.

“They like to run the football, so we had to stop the run, and make them one-dimensional,” he said, “and that’s what we did.”

Johnson said it was a “pleasure” to play in the Capital One Bowl this year.

“Not a lot of teams got to play in bowl games,” he said. “It was a pleasure to play in the game. Whether it was going through another experience besides the national championship, I would have loved to have been there and it was a different experience, but I enjoyed it.”

Right now, Johnson said the team is on break, but on Wed., Jan. 12, the team will have a meeting, and will quickly start its fourth quarter program.

“Then, the season will be here before you know it,” Johnson said.

Bulldogs to tango with Yellow Jackets