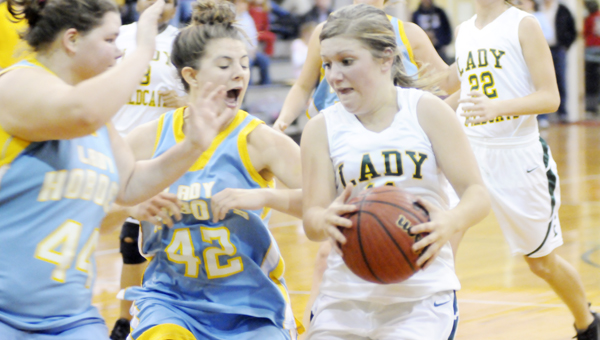 Florala’s Paige Irwin drives down the court in her team’s game against Laurel Hill earlier this season. | Andrew Garner/Star-News

Improving every game this season.

That’s exactly the case for the Florala Lady Wildcats basketball team so far this season.

“It was a big win last night against an area team with a good ball club,” FHS girls coach Ronnie Driver said in a telephone interview on Wednesday. “Our area is evenly matched all the way around.”

Driver said the girls have shown signs of improvement in every game this season.

“We played well enough last night to win,” he said. “I was real proud of them. They never gave up, and that’s one thing about our group. Even when they get down, they keep fighting and keep playing.

Florala is in the same area as rival Pleasant Home, Geneva County and Kinston. The Lady Wildcats will play Kinston this Friday night on the road.

But, as much as anything, Driver said his team’s defensive play has made all the difference this season, notably the post play under the basket.

“The girls have done a good job on defense,” he said. “We’ve been able to hold the other team down. Our defense has really helped us.”

As far as the area outlook for the rest of the season, the Lady Wildcats will have two more regular season area games after Friday night’s contest against Kinston.

Driver said the focus is playing good basketball from here on out.

“We’ll play Kinston this Friday night,” he said. “They’ve got a young team, but they’re really a good scrappy team. They gave us some trouble at home (on Jan. 4), and we’re going to have to play some really good ball on Friday night.

“The other two — Geneva County and Pleasant Home — both of those teams are just very sound, and very well coached,” he said.

When it comes down to it, Driver said he just wants to see his team get better each game.

“Like I tell my girls, I’m more interested in seeing them trying to improve every game, no matter if they win or lose,” Driver said. “Sometimes we step up, and that’s what happens. If they give it all they’ve got and improve every game, then that’s all we can ask out of them.”