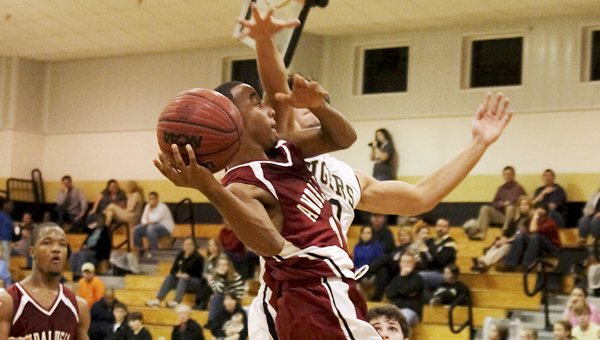 Andalusia’s Terrance Anderson (11) jumps up for a lay up as Straughn’s Chris Huggins (10) defends. | Kendall J. Davis/For the Star-News

Andalusia’s Corinthian Sims scored 18 points to help lead the Bulldogs to a 52-29 area victory and sweep over rival Straughn on Tuesday night at SHS.

The second-ranked Bulldogs improved to 20-2 overall, and 4-0 in Class 4A, Area 3 with the win over the Tigers.

Throughout Tuesday night’s contest, Andalusia used most of its bench, and held Straughn to only 20 points in the first half.

“In the second half, we changed defenses just like always and that’s what gave us the lead,” AHS coach Richard Robertson said.

Andalusia was 11-of-19 from the free-throw line.

In addition to Friday night’s contest against Ashford at home, the Bulldogs will play host to sixth-ranked Calera on Saturday night.

Leading up to the games later this week, Robertson said he doesn’t like where his team is at right now.

“We’re not playing well overall,” he said. “We’ve got to get better at what we’re doing. We’re breaking down and changing on our defenses.

“Straughn did a good job of controlling the tempo of the game,” he said.

Robertson added that the fan-base was “appreciated.”

“We appreciate our fans,” Robertson said. “We had a good fan following. I’d like to commend them.”