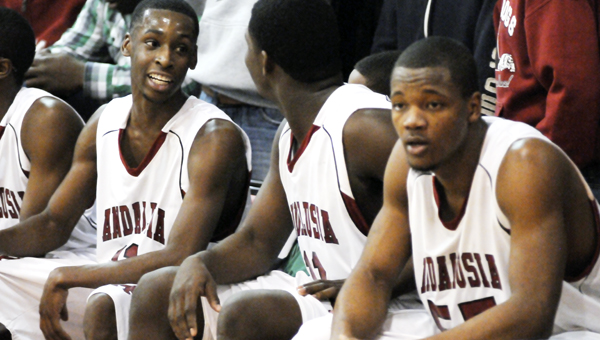 Andalusia’s five varsity starters scored in double digits on Friday night, and the Bulldogs went on a 16-0 run early in the fourth period to peal away from Ashford and get a 73-52 area win at AHS.

The Bulldogs led 32-27 at half time, and changed their defense in the final quarter of the contest, slowing the Yellow Jackets down and getting clutch steals and lay ups during the run.

AHS coach Richard Robertson said the win wasn’t pretty, but “it was a win.”

“We tried to take the ball handling away from them (in the third period),” he said. “When we did that, that gave us a change to get some steals and some easy baskets.”

Friday night’s victory for the second-ranked Bulldogs improves their record to 21-2 overall, and 5-0 in Class 4A, Area 3. Next Tues., Jan. 25, Andalusia will vie to clinch its regular season area title when it travels to play Headland.

Before next Tuesday’s game, the Bulldogs will have to face fifth-ranked Calera at home tonight in regular season action.

“With Calera, it’s a completely different ball game,” Robertson said. “They’re going to run on everything. We’ve got to get in position for that.”

The 16-0 run for the Bulldogs started with a well-executed pass from leading scorer Corinthian Sims to Jacard Townsend on the inside to make it 47-42. Sims led the Bulldogs with 18 points, and Townsend added 11 points.

Then Townsend got an offensive rebound, and got the put back after a steal to make it 49-42.

After Quayshaun Denson made two free-throws, Ashford called a time out to think things over, while trailing 51-42. Denson had the third-highest scoring total with 13 points.

The game got out of reach for Ashford as Denson made a layup on a steal, and Justin Dooley hit a jumper while off balance to give his team a 55-42 lead.

Another two steals later resulted in a Derrick King (who finished with 12 points) pass to Sims for a layup, and a Sims jumper to give the Bulldogs a nice 59-42 cushion.

Denson dashed all of the Yellow Jackets hopes when he drove the ball in the basket down the middle, where no one was there to defend.

Ashford got on the board in the fourth on a three-point play by Terry White. White finished the night with 13 points.

Andalusia kept a healthy 20-point edge over Ashford, playing the clock management card in running the clock out.

After a Sam Byrd layup to make it 71-49, the Bulldogs took a time out, and Robertson sent in the bench to get a little bit of playing time.

Given the win, Robertson said Ashford got to his team a couple times during the night, and that one of his goals were not attained.

“They broke us down a time or two,” he said. “Not that we’re trying to embarrass anyone. We wanted to get in our comfort zone.

“We missed our defensive goal,” he added.

Before their stellar run in the fourth period, the Yellow Jackets outscored the Bulldogs 15-13 in the third period.

In the first half, Andalusia had to rely on its perimeter-style offense. Dooley, who finished the night with 15 points, shot 3-of-5 from the perimeter in the first 16 minutes of play.

Additionally, Byrd scored four points coming off the bench in the second half.

Tonight’s game against Calera will tip off around 7:30 p.m. Today’s games will begin at 3:30 p.m. with the ninth grade team.

The Andalusia Lady Bulldogs came out in the third period, and let the Ashford Lady Yellow Jackets get a taste... read more