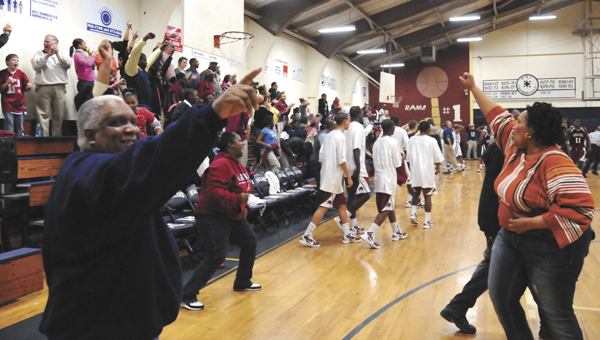 HEADLAND — Andalusia’s Quayshaun Denson banked a jumper with 1.3 seconds left to help lift the Bulldogs to a 72-70 area win over Headland on Tuesday night.

Before Denson’s game-winning shot, Headland’s Camren Reeves nailed a tres with less than 15 seconds left to tie the game 70-70.

Andalusia rushed down the court, where senior point guard Derrick King found Corinthian Sims on the inside. Sims missed his shot, and Denson came up behind him, got a good look and drained the winner.

“The first thing that came to my mind was that we worked on that the other day and go ahead and hit the shot,” Denson said.

With this victory, the second-ranked Bulldogs win their regular season area title, and will host the Class 4A, Area 3 tournament that starts on Fri., Feb. 11. Andalusia (23-2, 6-0) will face No. 4 seed and rival Straughn in the first round.

AHS coach Richard Robertson said the last shot made by Denson was a necessary one given the amount of time left.

“We had to shoot it,” Robertson said. “We had to get enough time even with a miss (by Headland). The thing I was worried about was that we were all scrambled up, and in disarray.

The last time Andalusia faced Headland, the Bulldogs won 71-66, and Robertson said that also was a fortunate win.

The Bulldogs scooted out to a comfortable 15-point lead with 2:38 left in the contest, but the Rams chipped into their deficit at the free-throw line, going 12-of-14 in the final period of the contest.

However, King hit clutch free throws when the going got tough. He hit his team’s 70th point at the line with less than 30 seconds remaining, as the Bulldogs took a 70-67 lead.

King finished the night 16-of-18 from the line, and led the Bulldogs with 23 points.

When asked what it took for King to have such a successful night at the line, he said one word, “concentration.”

“Like Coach says, ‘don’t go in there (practice) and play around, shoot free throws,’” King said.

Andalusia and Headland had slow starts at the start of Tuesday night’s contest, but the Bulldogs had the slight edge after the first and second periods.

During the second period, Headland seemed to take control of the game, when they made essential steals and easy buckets on the Bulldogs with the help of Marsh in the paint.

Robertson said he was just trying to keep Headland from getting out to a big lead in the first half.

“We were trying to keep them at bay so we can come in at half time with a plan,” Robertson said. “Now, the good thing about this is that we get to go home. But, the way we played in the fourth quarter and managing the last five minutes of the ball game will not suffice.”

Jacard Townsend scored 19 points in the win. Denson and Sims had 12 points each.

Williams led Headland with 25 points. Marsh had 18 points, and contributed with 13 points.

Andalusia will travel to face Northview (Dothan) on Thursday night. Tip off for the B-team is at 4:30 p.m.

King said he felt elated at getting the win.