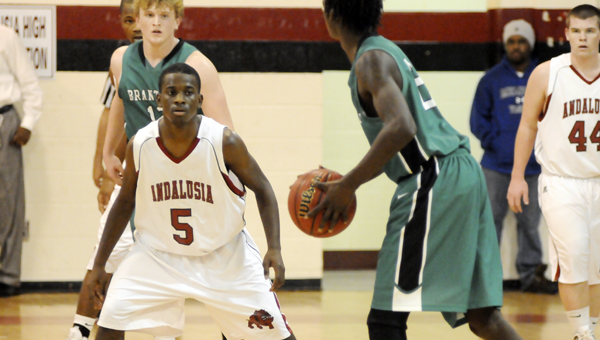 Andalusia went on a 16-0 run in the second period, and beat Brantley 65-55 Tuesday night at AHS.

AHS boys coach Richard Robertson said Brantley, as a program, is full of tradition, which was on display during the game.

“They can shoot the basketball,” he said.

Shooting the basketball was especially evident in the first period, where Brantley nailed five three-pointers and led 20-10 going into the second period.

Jared Wiley, who led Brantley with 18 points, drained two from the arch in the opening period. The other three were scored by Brantley’s Chester Person, Zachary Wiley and O.J. Guice.

Andalusia’s 16-0 run was started by Corinthian Sims, who finished the night with 12 points, on a quick lay up. Derrick King, who had nine points, drove the ball in for an easy lay up. Sims and Quayshaun Denson then scored two each and Brantley took a time out with its lead slipping away.

Andalusia would tack on eight more points after the time out, and outscored Brantley 24-9 to take a 34-29 at the much-needed break.

With this win, Andalusia has won 10 straight ball games, and improves to 26-2 on the season. Andalusia’s girls team still holds the record in win streaks with 18 straight in 1988. The closest the boys got was 16-in-a-row.

Andalusia’s last loss of this season was to Charles Henderson on Dec. 29 at the Ozark Invitational tournament.

Despite the win, Robertson said he still isn’t satisfied with the way the boys are playing.

“We’re not playing well enough,” Robertson said. “We’ve got a lot of things we need ironing out. There have been some phases of the game that have been breaking down all year.

“When we finish this week, we’ll see about stressing those things that need work,” he said. “There might be a personnel change, but again, tonight they went above our defensive goal.”

“We’re not taking anything away from Brantley,” Robertson said.

In the second half, the game remained tight throughout.

Andalusia took a 38-35 lead mid-way through the third period, but Brantley made two foul shots to bring it to one-point game.

Brantley’s Taylor Driggers hit a jumper and Guice drove the ball in the basket on Andalusia turnovers. Brantley led 42-41 with less than a minute left in the third, but a Victor Benson clutch jumper helped his team to a 44-43 lead going to the fourth period.

Then, Andalusia outscored Brantley 21-12 in the fourth to earn its 10th straight win.