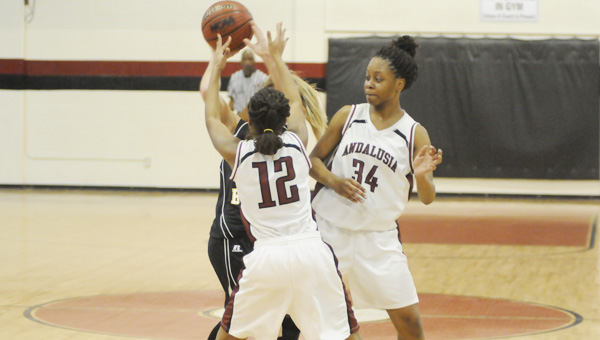 Andalusia’s Shi’Amber Townsend knew she had to have a good game Friday night against rival Opp.

Townsend scored 27 points, and brought down seven rebounds to help lead the Lady Bulldogs to a 59-46 victory over the Lady Bobcats on senior night.

Only up 24-22 at half time, Townsend said she felt she needed to help get her team back on track.

In fact, Townsend scored eight of her team’s first 10 points in the third period, where Andalusia went on to outscore Opp 19-11.

AHS coach Bennie Shellhouse said the plan was to get the ball in Townsend’s hands earlier in the game, but his team’s start didn’t indicate that.

“We decided to go after her (in the second half,” Shellhouse said. “She’s a big time player for us. She stepped up, and played in the third quarter for us.”

The Lady Bulldogs could break the record when they host the Class 4A, Area 3 tournament next week. Andalusia plays Ashford next Thurs., Feb. 10 at 7 p.m. in the first round. If the Lady Bulldogs beat Ashford, they will play the winner of the Straughn-Headland game on Sat., Feb. 12 at 7 p.m. for the area title.

Opp will play Luverne in Geneva at 5:30 p.m. next Thursday.

Andalusia outscored Opp 12-9 in the first period, and were outscored 13-12 in the second period.

Early in Friday night’s contest, Andalusia was in foul trouble.

Andalusia’s offense forced Opp to come out of the pocket to guard in the second half, and the Lady Bulldogs used this to their advantage, finding Townsend on the inside for easy buckets.

Opp, however, swarmed its defense to the middle, making it hard for Andalusia to make any shots.

Townsend said spreading the team out gave her the opportunity to make the easy buckets.

“We just spread the ball, shook them up a little bit and we all broke in some new ones (plays) and it just happened,” she said.

Andalusia outscored Opp 16-13 in the fourth period to get the win.

Attempts to reach OHS girls coach Allison Gregory after the game were unsuccessful.