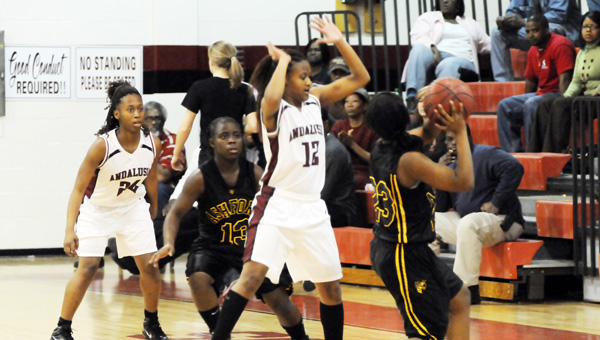 Andalusia girls coach Bennie Shellhouse characterized his team’s 75-41 win over Ashford Thursday night in the Class 4A, Area 3 tournament semifinal round as “sloppy.”

The Lady Bulldogs only led 15-9 after the first period, and then outscored the Lady Yellow Jackets 20-8 in the second period to take a 35-17 lead at the break.

Shellhouse said the 18-point lead at half time didn’t “feel” like they had the lead.

“We weren’t playing very hard,” he said about the first half. “We didn’t play defense very hard.

“It didn’t feel like (an 18-point lead) because we hadn’t played well,” he said.

With this win, the Lady Bulldogs (23-4) tie the 1988 girls team for winning 18 straight ball games. Andalusia will play rival Straughn in the area tournament finals on Saturday. Straughn beat Headland 42-39 in earlier action.

Shellhouse said the girls are going to have to step up their game against the Lady Tigers if they want to be able to host the sub-regional round.

“We’re going to have to play a lot better on Saturday than we played tonight to beat Straughn,” he said. “They’re playing much better. They can do some things that can hurt us if we don’t play hard.”

Shi’Amber Townsend led the Lady Bulldogs with a double-double (24 points, 13 rebounds). Latrexius Trawick contributed with 13 points. Alexis Horton led in assists with 12, and had 12 points for Andalusia.

Things started going Andalusia’s way in the second half, as Townsend got key put backs and lay ups under the basket for the Lady Bulldogs.

Townsend, who also had seven steals, got an easy lay up, and helped her team to a 46-21 lead at the mid-point of the third period.

Alectricia Barnes, who had nine points for AHS, made the back end of two free throws that set up a steal and three-pointer for Trawick from the corner.

Andalusia then went on to outscore Ashford 19-14 in the fourth period with the help of its solid inside game.

Alison Daniels had 10 points for the Lady Bulldogs, and Tylesha Malcolm had four points.

Shellhouse said he knows it’s going to be a contest Saturday night.

“We’re going to have to play good defnse,” he said. “They shoot the free throw well, and the outside jump shots well. It’ll be a good game Saturday.”