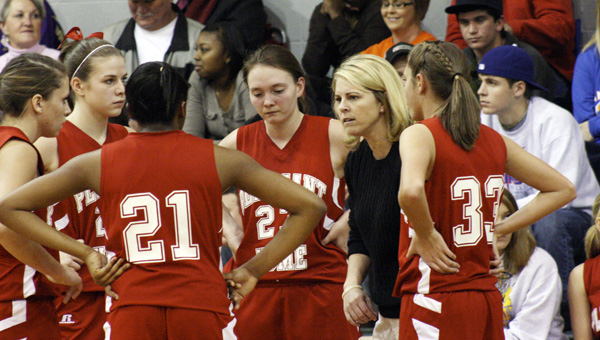 Pleasant Home beat Geneva County 56-44 Thursday night in the semifinals of the Class 1A, Area 2 tournament. The Lady Eagles will play Florala in the tournament finals Saturday night at 7. | Stephanie Nelson/Star-News

The Lady Eagles beat Geneva County 56-44, while the Lady Wildcats won 48-15 over Kinston.

Pleasant Home and Florala earned a berth in the sub-regional tournament, and will face each other in the area tournament finals Saturday night. Tip off is at 7 p.m. in Florala.

Trailing 25-23 at half time, Pleasant Home mounted an offensive and defensive attack over the Lady Bulldogs.

The Lady Eagles outscored Geneva County 14-4 in the third period, and 19-15 in the fourth to get the win.

“We got us a victory tonight,” PHS girls coach Kelley Garner said. “It was a nip and tuck in the first half. They did a good job, and it was a total team effort tonight.”

Garner said the key in the second half was that her team took control.

“We played good defense,” she said. “We rebounded well in the second half, and controlled the boards.”

“It was a good win, and hopefully our momentum will carry over to the Florala game,” Garner said.