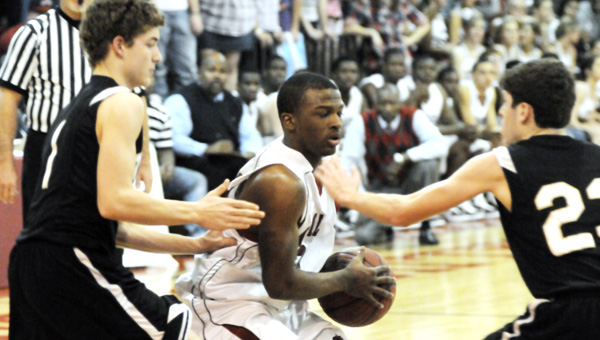 Andalusia played into Straughn’s slow tempo-style game Friday night, but the Bulldogs came away with a 50-33 semifinal victory over the Tigers in the Class 4A, Area 3 tournament at AHS.

Friday night’s win for the second-ranked Bulldogs improves their record to 28-2 overall. Andalusia will face Headland in the area tournament finals Monday night at 7. In the first game of the tournament, the Rams defeated Ashford 74-63.

“I knew Straughn was going to play it tough,” Robertson said. “(Straughn) Coach (Rusty) Andrews is a great coach. He knew what to do, and how to utilitze its personnel.

“Ours broke down in critical situations, but we’re still playing,” he said. “It wasn’t pretty.”

During the first period of play, Andalusia senior Justin Dooley, who had 11 points, knocked in two three-pointers to give his team a 7-5 edge early. Derrick King, who finished with eight points, hit an early three-pointer to help his team take a 4-2 lead.

Straughn’s Austin Pickrel scored the Tigers’ first points of the night on a pass from Avery Driver on the inside.

Andalusia’s first point of the night came on the back end of a pair of free throws from Jacard Townsend.

Driver then hit a three-pointer to give his team the only lead of the night.

After Dooley’s second three-pointer, Straughn’s Chris Huggins found Pickrel for an easy bucket, and Giavann Nurse got a pair of free throws to trail 10-9 after the first period.

The Bulldogs then held Straughn to only four points in the second period despite letting the Tigers control the tempo of the game, which they did throughout the contest.

“That’s what they had to do,” Robertson said about the game’s pace. “(Andrews) knew he had to make us play a slower-paced game.”

In the second period, Andalusia began to get fouled, and was 4-of-10 from the free-throw line.

Later in the second, the Bulldogs took a 21-9 lead on a three-point pass between Quayshaun Denson, Townsend and DeUnta Benson.

During the third period, Straughn controlled the tempo of play as it did in the first period.

“We worked hard,” he said. “We took better care of the ball. We still turned it over too many times to beat a good team like Andalusia. I was impressed with our effort.

“We had a good week at practice,” he said. “Next year, we should be much stronger. We’re going to get after it in the off season.”

Denson got things going in the third with an easy drive to the basket, and Corinthian Sims followed with a long-range jumper to bump his team’s lead to 26-14.

Dooley hit his third three-pointer a the start of the fourth period, where the Bulldogs led 32-17.

Townsend had 11 points for Andalusia, and Denson had seven.

Robertson said the team will have to play their “best” against Headland Monday night.

“We’ve got to come out with the best game we can play to try and stay at home,” Robertson said. “We’ve got a lot of improvement to do.”

For Straughn, Pickrel had 13 points, and Josh Henderson had seven points.