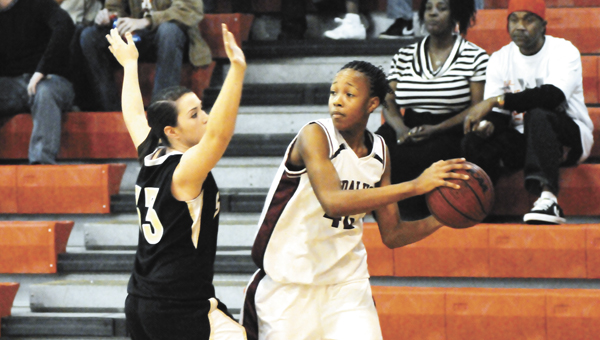 Andalusia’s early 12-0 run in the first period Saturday night was the ticket to success, as the Lady Bulldogs beat Straughn 59-25 to claim the Class 4A, Area 3 championship.

AHS girls coach Bennie Shellhouse, who was late to the game because of a father-daughter dance, told the girls just before tip off to dominate from the beginning.

“I said hey look, ‘Let’s go ahead and take them down right here and play hard,’ ” he said. “They were excited at the beginning. So, I knew they were going to play well the couple first quarters.”

With the win, the Lady Bulldogs surpassed the 1988 girls team for the number of straight wins. Andalusia claimed its 19th straight win Saturday night.

The Lady Bulldogs put the game away, outscoring the Lady Tigers (21-8) 14-10 in the fourth period.

“It’s just so hard for us to match up with them,” SHS girls coach Scott Kinsaul said. “We couldn’t afford to get down early again like we have the first two times, and we did. We’re just not good enough offensively to get out of the hole like that.”

Andalusia will play host to Area 4 runner up Alabama Christian Thursday at 7 p.m., while Straughn will travel to play Area 4 winner Brewbaker Tech.