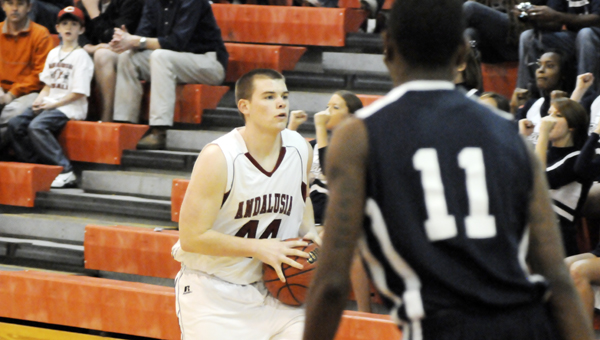 When asked what his thoughts were on the game on Wednesday, Robertson gave a lot of respect to new Trojans’ coach Nigel Card, who coached at Auburn-Montgomery for 23 years.

“They’re well-coached, and they’re very knowledgeable about the game of basketball,” Robertson said. “I’ve seen them play, but you’ve got to know how they’ll play you.”

Second-ranked Andalusia (29-2) beat the Rams 88-75 Monday night in the area title game, where the Bulldogs had 30 rebounds and shot 25-of-31 from the free-throw line.

Throughout this week, Robertson said he’s been telling the players about St. James and what they bring to the table.

“The thing about it is that they’re just like us — they’re still playing,” he said. “At this point in time, you’ve got to take care of games one game at a time. You can’t be looking ahead because if you don’t win, there won’t be another one until next season.”

One thing Robertson said he is worried about Friday night is losing a big lead during the game.

“They might control the tempo, and they have ball handlers that might cause us some problems,” he said. “What we’ve got to do is get out, and get out like we’re supposed to. We got out like we were supposed to (against Headland), but they came back. One of these nights you won’t be able to come back and do those things this season.

“(The Trojans are) not like us,” Robertson added. “They don’t cause things. Whatever you’re doing, they’re coached well enough to go into that situation. They take and play you according to what you do. They know the game, they’re well-disciplined and fundamentally sound.”

Last season, the Bulldogs had to travel to UMS-Wright in the sub regional round, where they won 55-45.

“The thing about being at home is now after Friday night, everyone’s got the same advantage,” Robertson said about the probable upcoming games on the 90-foot college courts. “The difference in the game from Saturday morning on is that you’re going to be playing on a college court, rather than a high school court.”

In the end, it’s all going to come down to defense, Robertson said.

“If we take care of Andalusia basketball, then I think we’ll be able to play our game,” he said. “We’ve got to be prepared for the unexpected, and play better defense.”

In the Class 1A sub regional tournament, Pleasant Home will travel to face J.F. Shields. Tip off is at 6 p.m.

Fighting for a spot at regionals