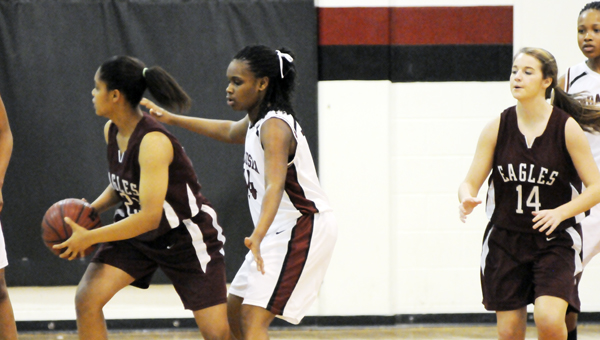 For the third year in a row, Andalusia’s varsity girls basketball team will play in the Class 4A South Regional Tournament.

Andalusia outscored ACA 27-2 in the first period, but the Lady Eagles had the upper hand in the second period, outscoring the Lady Bulldogs 13-7.

“We just kind of quit playing defense,” AHS girls coach Bennie Shellhouse said. “They were pressuring us a little bit. We just kept running down there, and throwing the ball away.”

Shellhouse said the first team was on the court during the second period, and that can’t happen next week at the regional tournament.

“The teams get better, and we have to play better,” he said.

Ninth-ranked Andalusia (25-4) will face UMS-Wright next Fri., Feb. 25 at noon in the University of South Alabama’s Mitchell Center in Mobile.

Shellhouse said he got on to the girls for their performance in the second period at half time, and told them to play hard in the third period.

The Lady Bulldogs did, outscoring the Lady Eagles 21-7.

“I felt like we did not play a complete first half,” Shellhouse said. “We let up on the defensive side of the ball.

In the fourth period, Andalusia’s bench had the opportunity to get some playing time.

Shellhouse said one facet the team must improve on is its defensive play.

“We did some things we shouldn’t do,” Shellhouse said. “We got out of position some, I felt like we were not sound fundamentally tonight.”