Lady Wildcats look to be ‘competitive’ 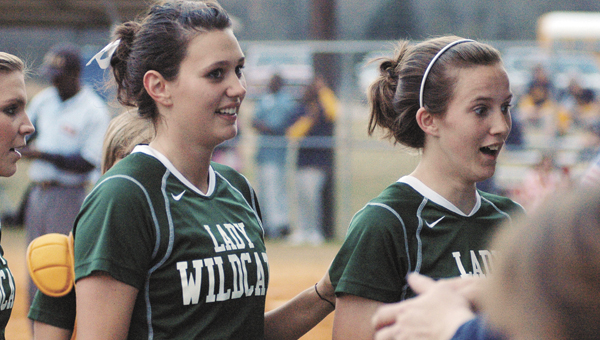 Florala’s girls softball team will begin its season today on the road against Andalusia. First pitch for the junior varsity team is at 4 p.m. | File photo

New Florala head softball coach Jonathan Stinson said he wants the Lady Wildcats to do one thing every game this season.

“As cliche as it sounds, I want us to be competitive in each game we’ve played,” Stinson said by telephone.

The Lady Wildcats will begin their season on the road against Class 4A Andalusia today at 4 p.m., starting with the junior varsity team.

The varsity team is comprised of six seniors, three juniors, two sophomores and an eighth grader.

Stinson said simply that a short-term goal for the team is to win the area.

“Obiviously, we’d like to be one of those two teams,” he said, referring to the chance to advance to the regional tournament. “I think we have a chance to do that if everybody keeps progressing like they have been at practice.”

Florala is in Class 1A, Area 2 with Geneva County, and powerhouse Kinston.

“Kinston is strong year in and year out,” Stinson said. “We have some real tough-minded girls. (Former FHS softball) Coach (Roger) Hammonds did a real good job getting the foundation in.

Leading up to today’s contest against the Lady Bulldogs, Stinson said the team is right where it needs to be on the practice front.

“I’ve got smart girls that are coachable,” he said. “I feel like in April, when it matters, we’ll be able to compete with anybody on our schedule.