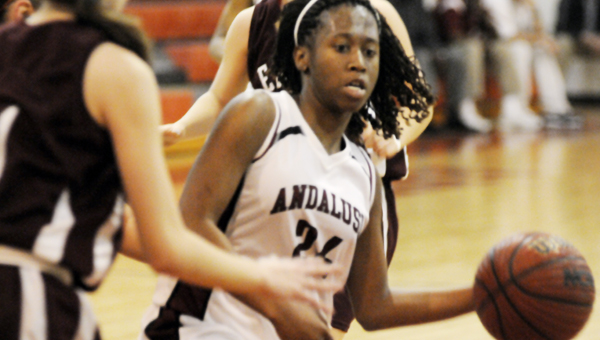 Andalusia's Alexis Horton will try and help lead the Lady Bulldogs to a semifinal win over UMS-Wright Friday at the south regional tournament in Mobile. | Andrew Garner/Star-News

Andalusia girls basketball coach Bennie Shellhouse said his team is ready for what lies ahead as the Lady Bulldogs will play against UMS-Wright at the Class 4A South Regional Tournament in Mobile this week.

“I’m not going to play to what other people do,” Shellhouse said about the game plan. “We’re just going to do what we do. If someone’s better than me, and if they beat us doing something better, then I’m OK with that.

“We’re going to press, push the ball up the floor and play Andalusia basketball,” he said.

Ninth-ranked Andalusia will face a UMS-Wright team that likes to take a lot of outside shots, where it is dependent on the perimeter, Shellhouse said.

“They’ll pick you in a zone,” Shellhouse said. “That’s going to be hard for us to defend.

“We’ll have to stay disciplined to stay out there in the three-point line, and make them earn it,” he said.

It will be more than a week since Andalusia (25-4) has played a game when the game gets under way at noon on Friday.

Shellhouse said he let the girls rest a couple days, before starting practice up again on Monday.

“Those couple days off helped them out a lot,” he said. “On Monday night, we had a real hard practice.

“I think they’re focused and ready to go,” he said. “We’ve got a great opportunity. We’re definitely one of the best teams in the state. We’ve got to show up and play.”

Friday’s game signifies the third trip the team has made to the regional tournament.

Shellhouse said the girls have always expected to be where they are at this point of the season.

“I don’t think it’s an overwelhming thing that we’re at regionals,” Shellhouse said. “That’s an expectation they just have.”