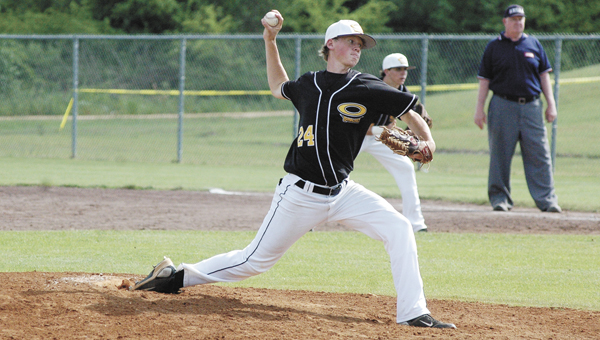 Opp’s Jansen Flowers had six strike outs and allowed two hits in the Bobcats’ 13-3 win over Red Level in the first game of a doubleheader Monday. | File photo

The Opp Bobcats started their 2011 season on a good note Monday with a doubleheader sweep over Red Level.

Led by eight seniors, the Bobcats beat the Tigers 13-3 in the first game, and 12-2 in the second game.

Twenty Red Level batters were struck out at the plate in the two-game contest at the Opp Sportsplex.

OHS head baseball coach Michael Cassady said pitching will be a big “key” for the team this season.

“We’ve stressed all year to throw strikes and play good defense,” Cassady said. “Everything else, I hope, will take care of itself. If you don’t throw strikes and make a lot of errors and don’t get extra outs, it leads to extra runs.

“We’ve got to be smart on the bases, do a good job of moving runners over and getting in scoring position,” he said.

In addition to eight seniors, the Bobcats have six juniors on the varsity squad.

The No. 1 goal for Opp this season, as always, is to win the area and go as far as they can in the playoffs, Cassady said.

Opp finished the 2010 season in the second round of the Class 4A state playoffs.

In Class 3A this season, the Bobcats will be in the same area with Geneva, Luverne and Pike County in Area 2.

Opp’s T.J. Register hit a three-run homer to help lead the Bobcats to the first game win over Red Level.

Jansen Flowers pitched 3.0 innings, had six strike outs, and allowed one walk and two hits. Tyler Harrison pitched in relief for Flowers. He struck out one and allowed two hits.

Register was 3-for-3 with two singles and one triple to help lead the Bobcats to the 10-run win Monday night.

Harrison was 2-for-2 with one double and one single. Kyle Marshall had two singles.

Opp falls in second round to Montgomery Catholic