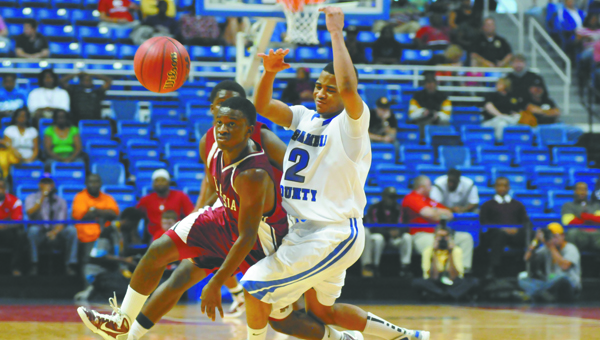 MOBILE — Andalusia’s Justin Dooley drained a pair of free throws with 18.2 seconds left in Friday’s contest, and the Bulldogs held on late to beat Escambia County 59-57 Friday in the semifinals of the Class 4A South Regional Tournament.
“It’s just an everyday thing to shoot free throws — it’s nothing new,” Dooley said about making the two free throws. “The (Escambia County) crowd was there. You just have to look at the basket, and it was just like at practice.”
Dooley’s pair of foul shots gave the Bulldogs a 58-55 lead, and the Panthers answered back with a Fred Knight put back with 2.3 seconds left.
When the game resumed, Andalusia’s Derrick King was fouled, and he made the back end of a pair of free throws with 1.7 ticks left to clinch the win for the Bulldogs.
AHS coach Richard Robertson said his team got an ugly win.
“It wasn’t pretty,” Robertson said. “We made a bunch of mistakes.”
Second-ranked Andalusia (31-2) will face former area foe Hillcrest-Evergreen tonight at 5:20 p.m. in the regional finals at the University of South Alabama’s Mitchell Center.
The Bulldogs haven’t lost a game since the Ozark Christmas Invitational tournament in December.
Andalusia met the Jaguars (25-6) once before on Dec. 17, 2010, where the Bulldogs won the contest by two points.
“The’ve got a lot of size, and they’re very talented,” Robertson said. “It doesn’t matter who we’re playing now, I’m just glad to still be playing. They’ve got a good basketball team. We were in the area together for years. They know us, and we know them.”
Trailing by 12 points, Escambia County mounted an offensive attack in the fourth period, making essential drives to the basket and getting foul shots from the line.
In the end, Escambia County (23-8) outscored the Bulldogs 29-22 in the fourth period.
Panthers coach Anthony Hayes said when his team was down by 12 points, they  went back to what has carried them this far.
“That’s more of our style of play,” Hayes said. “Playing an opponent like Andalusia, you have to be prepared for their style of play. We tried to do that. Once we went down 12, we said, ‘let’s go back to what we did to get us here.’
“These guys never quit,” he said. “As a coach, I’m proud of them.”
The Bulldogs’ out-rebounded Escambia County 32-31, and was 4-of-8 from the perimeter.
Andalusia junior Jacard Townsend led the Bulldogs in rebounds with 14.
King, Dooley, Corinthian Sims, Quayshaun Denson and DeUnta Benson, all seniors, finished in double figures for the Bulldogs.
Sims led with 12 points; King, Denson and Benson had 10 points each; and Dooley contributed with 11 points.
Escambia County and Andalusia were neck-and-neck throughout the contest.
Both were even at 11 points at the end of the first period. Andalusia then took a 22-19 lead at half time, and then outscored the Panthers 15-9 in the third period.
Escambia County’s Cedric Pierce led the Panthers with 16 points, and Dalvin Craft had 11 points.
Andalusia was 11-of-19 from the free-throw line, while Escambia County was 12-of-18.
Dooley said the team walked away with the win because of its leadership.
“We had the confidence with nine seniors, and we knew what was at stake,” he said.

• The AHS boys basketball team will play Hillcrest of Evergreen at 5:20 p.m. tonight in the regional finals for Class 4A South. If they win, they’ll advance to the state tournament. When the teams met in December, AHS won by 2.

Andalusia's Derrick King made the back end of a pair of free throws to help lead the Bulldogs to the... read more