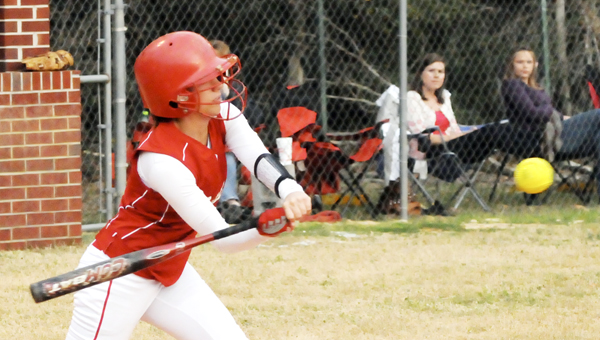 Getting hits can sometimes be contagious.

Pleasant Home scored four runs on four hits in the bottom of the sixth inning to earn a 5-4 season-opening win over Andalusia Friday night.

“It got contagious at the right time,” PHS softball coach Bradley Stephens said. “We got a little more selective at the plate, too. That’s what helped out a lot.

“Early in the game, we just took a while to catch on to timing,” he said. “Their pitcher (Olivia Dixon) did a good job. She was throwing strikes, and they played well behind her defensively until that one inning.”

The Lady Eagles trailed 2-1 until the sixth, where Andalusia committed three errors.

However, Andalusia’s defensive performance through the first five innings was impressive with Dixon on the rubber, and senior A.C. Riley behind the plate at catcher.

The Lady Bulldogs fall to 1-2 on the season, and will travel to face rival Opp Tues., March 8, while Pleasant Home will begin its area play on Monday in McKenzie.

Pleasant Home’s Emily Byrd got things going in the sixth with a lead off single. Robyn Weaver walked, and Megan Cook was hit by a pitch to load the bases with no outs.

Byrd scored on sac-fly by Ashley Copeland, and Weaver scored on an arrant throw at third base give her team a 3-2 lead.

Cook came around and scored on an error to give her team a two-run edge.

Abigail Kelley walked, and then scored her team’s winning run on an RBI single from Kat Dozier.

To finish off the inning, Caitlin Jernigan and Kaitlin Brookshire hit one single each.

Brentin Fuller earned the win for the Lady Eagles in the circle. She had 10 strikeouts, allowed four runs on three hits and had two walks.

Andalusia scored one run in the top of the first inning when Jessica Park crossed the plate on a passed ball. Park reached on a fielder’s choice.

Pleasant Home tied the game up in the third inning when Brookshire, who finished 2-for-4 with one RBI, grounded out to score Jernigan.

In the fourth inning, Riley scored on an RBI single from Megan Pugh.

The Lady Bulldogs added two runs in the seventh inning when Pugh scored on a passed ball, and Ellie Pollock made it home on a sac-fly from Samantha Greene.

On that sac-fly, Stephens commended Cook for making the catch despite the run scored.

“It could’ve been terrible,” he said. “She made one whale of a catch at center.”

“We say we had a bad inning (in the sixth) — even in that inning we were one play away from getting out of it,” Taylor said. “We did some good things. It wasn’t like we played terrible. I thought the girls did a great job fighting back.”

Jernigan was 2-for-4 with two singles and one run; Copeland and Dozier were 1-for-3 with one RBI each for Pleasant Home.