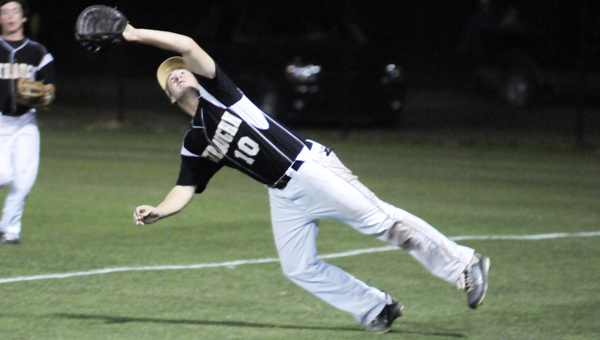 Straughn handed Opp its first two losses of the season Thursday night in a doubleheader, as the Tigers beat the Bobcats 3-1, 11-6.

With these wins, Straughn improves to 4-2 on the season, and Opp fell to 5-2.

Straughn’s Drew Jones hit a three-run homer in the bottom of the second inning, the Tigers scored seven runs in the fifth inning and Nick Allen hit a solo home run in the sixth inning to come away with the five-run win over the Bobcats.

“I was real proud of the way they kept their composure and didn’t lose their focus,” SHS baseball coach John Fussell said. “That home run Nick hit, gave us a cushion, and they’re starting to play together as a team, but we’ve still got a long way to go.”

With the bases loaded and the Tigers leading 3-2, Josh Dewrell scored the first run in the fifth inning on a Cody Hughes walk. Dewrell reached on a walk.

Then, courtesy runner Jacob Ganous scored on a Zack Turvin walk to give Straughn a 7-2 lead.

The Tigers scored their last three runs in the fifth inning on a two-run double from Andrew Burleson and an error.

OHS baseball coach Michael Cassady said the difference in the second game was the fifth inning.

“We played well in the second game except for that one inning,” Cassady said. “We had six walks, and had four of them consecutive. When you have walks, that leads to extra outs, and extra outs leads to extra runs and a good team like Straughn is going to capitalize on that.”

Straughn capped the night off when Allen hit a solo homer on the first pitch.

Jones had three RBIs and two runs; and Burleson had two RBIs for Straughn.

Dewrell earned the win with five strikeouts for the Tigers.

Straughn took an early 1-0 lead in the first inning on an RBI single from Allen to score Dewrell, who reached on a walk.

The Tigers added two runs in the fourth inning on a two-run home run by Turvin.

Opp scored its only run in the top of the fifth inning on an RBI single from Jansen Flowers.

Straughn will play host to Pleasant Home today for a doubleheader if the weather permits play. The first pitch will be at 11 a.m.