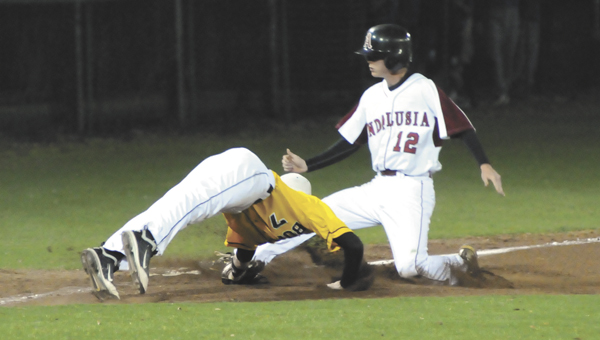 Andalusia’s Rob Maddox slides back to third base as Opp’s Drew Smith tries for the tag. | Andrew Garner/Star-News

Opp scored four runs in the top of the 11th inning to come away with a 9-5 rival win over Andalusia Tuesday night.

The Bobcats and Bulldogs staged a defensive battle throughout the entire contest.

Trailing 3-2 in the seventh inning, Andalusia tied the game up on a passed ball.

In extra innings, Opp scored two runs on RBI singles from Dillan Ziglar and Trey Short in the top of the ninth.

Both teams battled in the 10th inning, allowing no hits and no runs.

In the top of the 11th, Opp’s Hunter Roeser scored on an error to get things started for the Bobcats. Short, who helped Opp tie the game with a two-run double in the sixth inning, hit an RBI triple to put the game out of reach for the Bulldogs.

T.J. Register added an RBI double and Steadman Gerber hit an RBI single to seal the win for the Bobcats.

Andalusia didn’t give up that easily in the bottom of the 11th inning. Robert Woodall reached on a single and Maddox was hit by a pitch.

The final out came on a ground out by Ward.

Andalusia held a 2-0 lead from the first inning when Dilan Manring and Quinton Maddox hit an RBI single each.

Andalusia will play host to its Bulldog Brawl tournament, which starts on Friday.

Opp will play in the Straughn Invitational Tournament. The Bobcats will play Dale County and Greenville on Thursday in pool play. The first game is at 4 p.m. at the SHS baseball field.