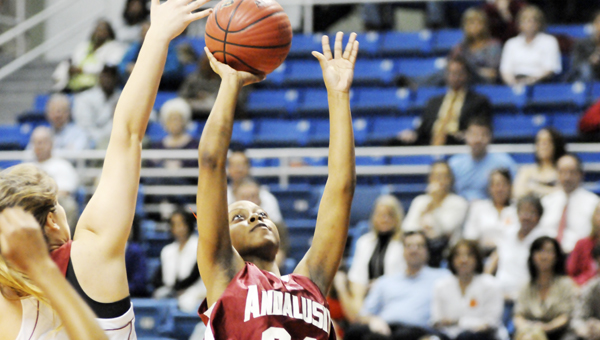 Andalusia's Shi'Amber Townsend was vital in helping her team get rebounds this season. | Andrew Garner/Star-News

Andalusia girls basketball coach Bennie Shellhouse said he credits his team’s “inner desire to win” as the catalyst this year, as the Lady Bulldogs finished 25-5 and won 20 straight games.

“I think that these girls, really, they just want to win,” Shellhouse said. “They don’t care who’s in their way to do it. They have an inner desire that leads them to win.”

The Lady Bulldogs ended their season at the Class 4A Regional Tournament, where they lost to UMS-Wright 50-35 in the semifinals.

During their loss to UMS-Wright, the Lady Bulldogs only shot 25 percent from the field and 41 percent at the free-throw line.

Andalusia had 14 turnovers, compared to UMS-Wright’s 21.

“It just wasn’t meant to be,” Shellhouse said about the loss. “It was just one of those days where it didn’t go in the hole.”

Andalusia had already owned the 20-win record by the time it advanced to the regional tournament.

When asked about what it felt like to help lead his team to win 20 straight games, Shellhouse said it didn’t cross his mind.

“It just feels like one of those things that didn’t really happen,” he said. “It was just a part of the job, and a part of the season. It’s very similar to the year we went to the Final 4 (in 2009).

“We started off the season 10-0, and we didn’t realize we were 10-0,” he said. “We were just trying to play as hard as we could. I think it kind of felt like that. It wasn’t like it was a huge milestone for us, we were just playing the season, and trying to win every game. It just happened to be that we won 20 in a row.”

This season, Andalusia averaged 55.8 points per game, had 25.9 rebounds per game and racked up 14.5 steals per game.

Offensively, Shellhouse said the girls grew up and made good decisions.

“I thought we matured a lot this year in our offensive sets,” he said. “Everything wasn’t steals and fast breaks. We actually could set up and run some of our offensive stuff.

“We had height, but not necessarily size,” he said. “It was a struggle for us at the beginning of the year playing Prattville, Opelika and Enterprise — all those teams.”

In addition to his coaching duties, Shellhouse serves as the AHS band director and assistant principal, and when asked if he’ll return next year as the head girls basketball coach, he said he hasn’t made a decision on it yet.

“I haven’t decided if I want to do this again,” Shellhouse said. “I’ve talked to the girls about it, and they understand. I think this is a special group of girls.