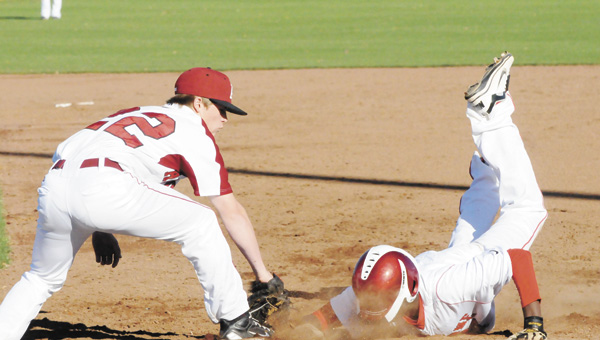 Andalusia's Quinton Maddox (22) tries for the tag Friday at firt base. | Andrew Garner/Star-News

Andalusia held a 4-2 lead over Elba in the third inning at Crum Foshee Field Friday night when the unexpected happened — a light caught on fire.

“It was just one of those things that happens,” AHS boys coach Jonathan Rasberry said.

After the light burst, the game was called, and Elba didn’t want to continue at AHS.

Andalusia took an early 1-0 lead after the first inning, and cut into Luverne’s two-run lead on Robert Woodall’s RBI triple. The Bulldogs scored their first run on an error.

The Tigers’ three runs in the second inning came on three hits and three errors.

In the fourth inning, Luverne’s runs came on three hits and one error.

To close the game out, Luverne hit two RBI singles and one two-run double in the top of the seventh inning.

Woodall was 2-for-4; and Rob Maddox, Zack Ward, Jay Brewer and David Mahaffey were 1-for-4 each for Andalusia.

During the contest, Wewahitchka did not show up to play at its 3 p.m. game against Carver at LBWCC.

The tournament format will transition to a round robin format, where all five teams that are left will play today at AHS. The first game begins at 9 a.m., and the last game will begin at 7 p.m.

In junior varsity action Thursday night, Andalusia and Straughn split in a doubleheader. The Bulldogs won the first game 2-1, and the Tigers took the second game, winning 4-0.

Opp girls on fire at tourney