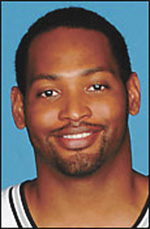 ” All our former players and athletes, we’re proud of them whatever their endeavors are,” AHS head basketball coach Richard Robertson said.

Horry finished his career at Alabama with 1,591 points, and is ninth all-time in rebounding with 929.

He still ranks third in all-time steals with the Crimson Tide, and is Alabama’s all-time leader in blocks with 286.

After playing college basketball, Horry went to play in the NBA for 16 seasons, and became one of the most decorated players in the league.

Horry played at Andalusia High School and under Robertson from 1984-1988.