Opp girls on fire at tourney 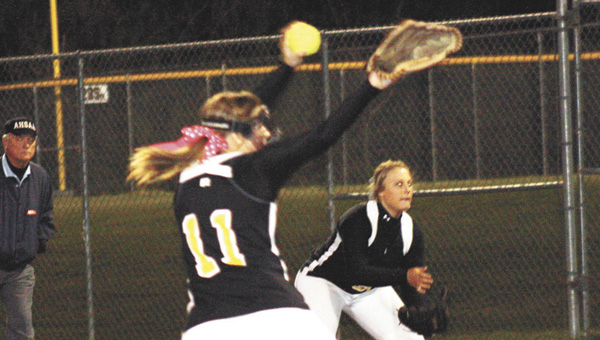 Opp’s Syndey Jones was the winning pitcher on Friday against Geneva. | Kendra Bolling/Star-News

Opp set its winning engines on high Friday, and the Lady Bobcats walked away with two wins in the City of Andalusia’s Department of Leisure Services annual fast pitch softball tournament at the Andalusia Sports Complex.

Reeves said he emphasized to his team that getting off to a good start was key.

“That’s important, and they did a good job with that,” he said. “But then we kind of sat on the lead. We had people on the whole game, but we couldn’t get them across. I thought my pitcher (Sydney Jones) pitched a great game in the first game.”

The Lady Bobcats beat rival Andalusia 9-2 in the second game; and edged Geneva 4-3 in the first game.

Andalusia scored four runs in the first inning, but couldn’t get anything going when it lost its first game of the day to Jackson, 6-5.

“We had a really good inning early, and then we just couldn’t ever get any offense after that,” AHS girls coach Marcus Taylor said about the first game. “We had our chances. Things just never really went our way, and it’s been that way this whole year. We’ve had some bad luck, we’ve had some errors and haven’t hit the ball well at times.”

The Lady Bobcats scored seven runs in the third after scoring two in the second inning to get the win when time was called.

Octavia Thompson, Laiken Free and Courtney Mobley were 1-for-3 each behind the plate. Morter was 2-for-3 for the Lady Bobcats.

Andalusia only managed two hits against Opp. Its two runs came on an error in the second inning, and an RBI single in the fourth inning.

Ellie Pollock was 1-for-2 and had a double; and Megan Pugh was 1-for-2 with one single and one RBI.

Opp scored its four runs in the first inning, gave up three runs in the second inning and held on to get the one-run win.

Thompson and Beth Anne Spurlin were 1-for-3 each and had one run each; Mobley was 2-for-3 with one run; and Haley Norris and Kelly Pierce were 1-for-2. Jones scored Opp’s fourth and winning run in the first inning.

The Lady Bulldogs shot out to an early 4-0 lead in the first inning when Jessica Parker, Emily Terry, A.C. Riley and Abbie Young scored on two hits.

Andalusia added its fifth run in the fourth inning when Parker scored on an error.

Andalusia will play Geneva at 9 a.m. today on Field No. 3 to continue its pool play.

Taylor said today’s play gives his team another chance at trying to get a win.