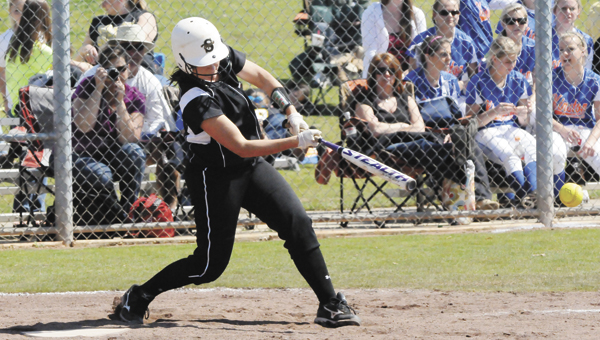 Straughn’s Lady Tigers bounced back from losing their first two games at the City of Andalusia’s Department of Leisure Services annual fast pitch softball tournament Friday, and won five straight to come away with the tournament title Saturday night with a 7-0 victory over Excel.

The Lady Tigers advanced to the finals after a 4-2 defeat over Kinston.

Andalusia got its only win of the tournament with a 7-3 victory over Greenville in pool play, after losing to Geneva 9-6 to start the day.

Opp, who finished third in the tournament, fell to Excel 6-5 in the semifinals. The Lady Bobcats won three straight with wins over Pleasant Home, Jackson and Greenville.

The Lady Tigers scored six runs in the third inning on their way to win the annual fast pitch softball tournament.

Paige Caraway pitched 5.0 innings, and allowed no runs on 12 hits.

Wiggins got things going for Straughn in the first inning with an inside-the-park home run.

Straughn added one run in the second inning on an RBI double by Laken Harris to help her team take a 2-0 lead.

Kinston scored two runs in the bottom of the third inning on a single by Madison Weeks.

The Lady Tigers took a 3-2 lead when Caraway scored on an RBI double by Tiffany Taylor.

Straughn won the game in the fourth on an RBI double by Wiggins.

Pleasant Home scored five runs in the second and three in the fifth to knock out the Lady Bulldogs.

Andalusia scored its only run in the fifth inning.

The Lady Eagles scored two runs in the first inning, one run in the third inning and seven in the fourth to beat the Lady Purple Cats.

Caitlin Jernigan and Robyn Weaver were 3-for-3 for Pleasant Home, and Kaitlin Brookshire was 2-for-2.

Andalusia girls coach Marcus Taylor said it was good to get a win, and over the hump Saturday.

“Anytime you win a game, I don’t care who it’s against or what sport it’s in — getting a win is good for morale,” Taylor said. “We have not played well, except for one game really.

“We brought our best when we played Ashford,” he said. “When we bring our best, we can play anybody. We’ve got to get more consistent at bringing our best effort all of the time.”