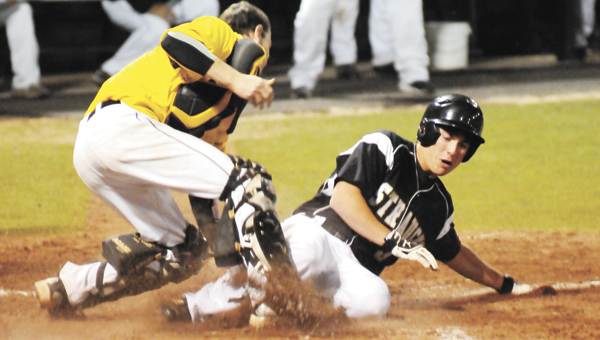 Straughn’s Andrew Burleson slides into home during earlier action against Opp Saturday. The Tigers went on to beat Opp 10-3 to advance to the invitational title game against Dale County. | Andrew Garner/Star-News

Straughn got a come-from-behind win over Dale County Saturday to win its own invitational tournament for the second time in a row.

Trailing 6-1, Straughn scored seven runs in the bottom of the fifth inning, and pulled away late to beat Dale County 11-6.

Straughn will face Dale County again today in a doubleheader in Dothan at 4 p.m.

Dale County took a 6-0 lead after the first two innings.

Straughn’s Zack Lunsford took over on the mound, and pitched three scoreless innings for the Tigers to get the win. He allowed one hit and no runs, and had four strike outs.

After Lunsford came in, Straughn got on board in the fourth on an RBI double from Cody Hughes.

In the seven-run fifth inning, the Tigers got things on a roll after loading the bases with no outs and Josh Dewrell up to bat. Dewrell was walked, and scored Lunsford to make it 6-2.

Straughn baseball coach John Fussell said the turning point of the game came when his team loaded the bases.

“We did exactly to them what they did to us in the first two innings,” Fussell said about the fifth inning. “They started pressing, and squeezing a little bit. We were just playing relaxed.

“We need everybody on this ball club to do their role and to be unselfish,” he added. “If we do that, then I’ll be happy. Dale County has a good team. They’re very well-coached. They have good athletes.”

With runners on first and second, Straughn’s Nick Allen, who finished 1-for-3, hit an RBI double to make it 6-4.

Dewrell then came in on a baulk, and Hughes hit an RBI double to tie the game up 6-6.

Straughn took a two-run lead going into the sixth inning on an RBI single from Zack Stinson, and an RBI from Lunsford.

“I’m extremely proud that they overcame some obstacles,” Fussell said. “A couple good things started happening, and they kind of went from there.”

Dewrell, who got the save, came in for Lunsford in the top of the sixth inning, and finished with four strike outs.

The Tigers scored three runs in the bottom of the sixth on RBIs from Fussell, Hughes and Stinson.

In earlier action at the invitational, Straughn beat Opp 10-3 to advance to the finals.

The Bobcats trailed 6-0, and scored eight runs in the fifth inning on their way to a 10-run win Saturday.