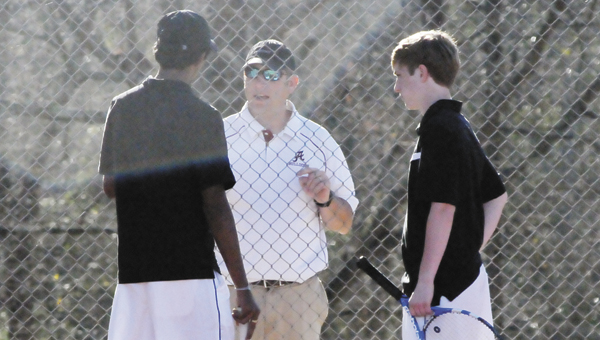 Complete coverage of Andalusia’s Tuesday match against Enterprise at LBWCC will be in the Thurs., March 17 edition of the Star-News.

The Bulldogs added another rout this season, and without the No. 6 seed, lost in No. 1 singles action.

In doubles, Andalusia’s David May and Doster defeated Hall and Gary Likely 8-1 in the No. 1 seed, while Walker, Foshee, Bulger and Parker picked up wins in No. 2 and No. 3 doubles.

In girls doubles, Botta and Bowdoin won 8-2 in No. 1 doubles; and Till and Hunter Albritton won 8-3 in No. 2 doubles.

The only loss for Andalusia’s boys came in No. 1 singles, where T.R. Miller’s Nick Dorso beat Andalusia’s Alex Evans 8-4.

Smith and Evans defeated Dorso and Kast 8-2 in No. 1 doubles; Patel and Moore defeated Terry and Jones 8-3 in No. 2 doubles; and Scruggs and David May defeated Weaver and Hines 8-3 in No. 3 doubles.

In doubles, Boyington and McCord defeated L. Hetherington and D. Hetherington 8-2 in No. 1 doubles; Beasley and Botta defeated Nelson and Carlson 8-1 in No. 2 doubles; and Jones and Tillman defeated Adams and Atthouser 8-0 in No. 3 doubles.