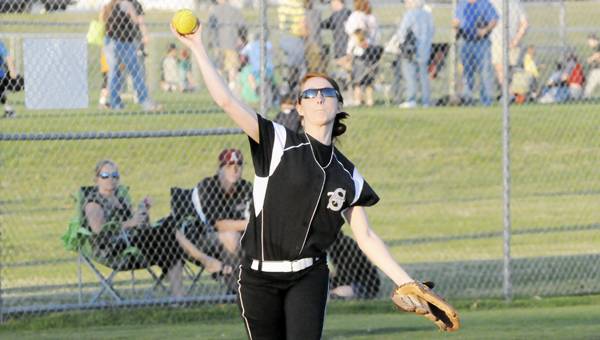 Straughn’s Tiffany Taylor and Laken Harris had two RBIs each to help lead Straughn to a 7-2 area rival victory over Andalusia Tuesday night at the Andalusia Sports Complex.

The Lady Tigers struck first with three runs in the second inning, and scored two runs each in the fifth and seventh innings to get the win.

“We’ve had a lot of close games in those seven,” SHS softball coach Ray Wilson said. “Some one-run games we weren’t winning early on. That gives you a little bit of confidence and that kind of carries over.

“The bats are starting to get a little bit better,” he said. “We’ve hit the ball well the last couple of games. We need to continue to do so — progress each and every time we get on the field.”

Andalusia falls to 0-2 in area play, and will travel to face Florala Thursday night.

Straughn will play host to Headland in area action next Mon., March 21 at 4 p.m.

Taylor hit her first RBI on a put out to score Paige Caraway, who reached on a single in the second inning.

Straughn’s Tori Bracewell and Megan Johns then scored on Harris’ single to give the Lady Tigers a 3-0 advantage.

The Lady Tigers’ two runs in the fifth inning came on RBI doubles from Bracewell and Messick.

After Messick was pulled from the mound in the bottom of the sixth, Kaitlynn Wiggins, who got the save, came in and allowed two quick Andalusia runs.

The Lady Bulldogs scored on a two-run double from clutch-hitter Abbie Young.

Straughn’s final runs of the contest came on one hit and an Andalusia error in the seventh. The Lady Bulldogs committed nine errors Tuesday night.

“We just continue to beat ourselves,” AHS softball coach Marcus Taylor said. “We’ve been given the opportunity to make a play, and we’ve just got to seal the deal.

Messick scored on Taylor’s second RBI of the night, and Caraway scored on an error.

Wiggins had three strikeouts and allowed two runs for the save.

Olivia Dixon had one strikeout for Andalusia.