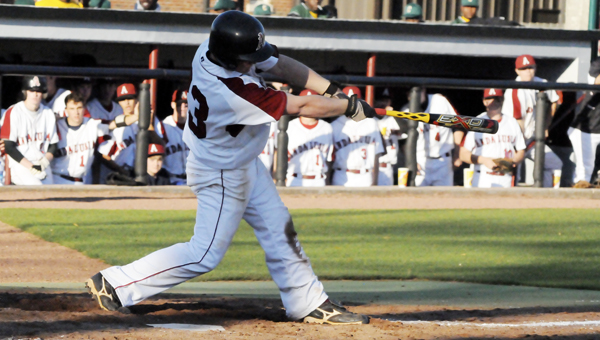 Andalusia's Zack Ward gets a hit during the Bulldog Brawl Tournament. | Andrew Garner/Star-News

Andalusia beat Brantley 10-7 in the first game, but fell 7-5 in the second game despite scoring five runs in the first inning.

“We’re not finishing late,” Rasberry said. “When we do score early, we’re not holding on to the score early. We’ll turn right around and give it right back up.

“Right now, we’ve got to find a way to stop that,” he said. “We’ve talked about that, and I feel like the way we played (Tuesday) was a lot better than what we showed this weekend.”

This season, Andalusia has held an early advantage in 11 of the 13 games it has played this season, Rasberry said.

“We still have so many things to work on,” he said. “It’s just a mixture of things we have to work on.”

The first area game for Andalusia is one week away against Headland, and Rasberry said the players need to exhibit the same game-type focus at practice to get ready.

“That’s when a new season begins,” Rasberry said. “That’s what matters. I’m not really worried about our record. It really doesn’t matter until we get to area play anyway.”

Andalusia fell to 5-8 on the season after the split against Brantley.

One word that Rasberry said he hears too much, and said is a dangerous word right now is “potential.”

“I hear people say, ‘y’all have got a lot of potential out there,'” he said. “‘Potential’ is a bad word — it sounds good. It’s a bad word because you haven’t done it yet.

“That’s the big thing I’ve stressed to them,” he said. “Until we become that team that’s a really good baseball team, and not the team that’s, ‘oh, they have potential,’ we’re not going to win ball games.”

When asked how the players are responding, Rasberry said the point was delivered.

“I think when we talked about it last night, that it kind of went home,” Rasberry said. “I let them know we’ve got so many practices before our Headland game, and we need to try to get better each and every day.”