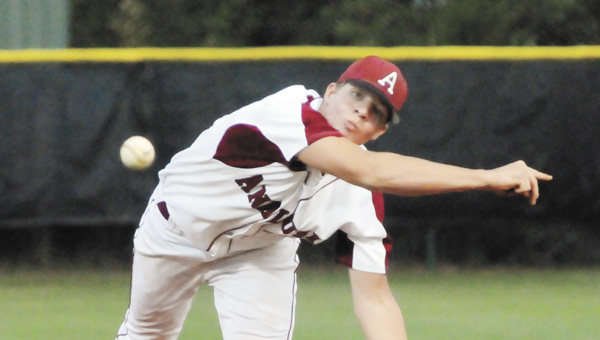 Andalusia’s Stewart Studstill pitches in relief during the first game of the doubleheader against Pleasant Home Monday night. Studstill struck out two in the seventh. | Andrew Garner/Star-News

The Bulldogs scored eight runs in the second inning of the first game to win 18-0 in five innings, and then won the second game 11-1 in six innings.

Andalusia improves to 7-8 on the season, and Pleasant Home falls to 2-6.

This is something that AHS head baseball coach Jonathan Rasberry said he’s been looking forward to seeing.

“That’s what we’ve been looking to do,” Rasberry said. “I thought we did a good job at bat, and I thought we executed well on some things.

“We’ve still got some things to touch up this week before we start area play,” he said. “I did think our swings were a lot better. I thought we squared up on the ball.”

Andalusia will play host to Headland Thursday in a single game, and the first pitch is slated for 5 p.m.

On Sunday, Rasberry said he had the boys at practice, and emphasized to them that this week was the start of a “new” season.

“Right now, we’re 2-0,” he said after the wins over Pleasant Home. “Our season started Sunday.

“We’re trying to approach it (area play) like we’re 2-0,” he said. “It all starts Thursday. It’s going to be a very good and exciting game. I think we’ll come prepared to play, and we’ll see what happens.”

Andalusia scored eight runs in the bottom of the second inning on six hits and two errors.

The Bulldogs swung through Pleasant Home’s pitching rotation, where the Eagles made nine substitutions in the inning.

Andalusia’s Quinton Maddox and Tyler Raines scored on doubles to get the inning going.

Robert Woodall singled Dilan Manring in, and Woodall later scored on an error.

The last two runs scored by Rob Maddox and Grayson Campbell were scored on errors.

Andalusia scored four runs in the bottom of the third on three hits, and left two men on base.

The Bulldogs sealed the win in the bottom of the fourth when they scored six runs on three hits and one error.

R. Maddox earned the win on the mound for Andalusia. He had one strikeout, and allowed no runs on three hits. Jay Brewer came in for the relief and struck out one. Stewart Studstill earned the save, and had two strikeouts in the seventh inning.

Pleasant Home’s Fernando Torres and Hunter Greathouse were 1-for-2 each; and Sid Newby was 1-for-3.

The Bulldogs racked up eight runs on five hits in the bottom of the fifth inning to claim the doubleheader sweep over the Eagles.

Pleasant Home scored the first runs of the game in the top of the second inning to take its first lead of the day.

Andalusia got things going in the fifth when it loaded the bases with no outs. R. Maddox then hit a fielder’s choice to score Ward, who reached on a single. Woodall, R. Maddox and Campbell then scored on a double by Henderson and walk by Brewer.

Lee Miles then scored on a double by Ward, and Ward scored later on a single by Woodall.

Winning pitcher C.P. Rogers struck out one and allowed no runs in two innings.

Campbell got the save for Andalusia.

Hunter Weaver was 1-for-2 for Pleasant Home.

The Bulldogs scored their last run of the night on an RBI double by Raines.